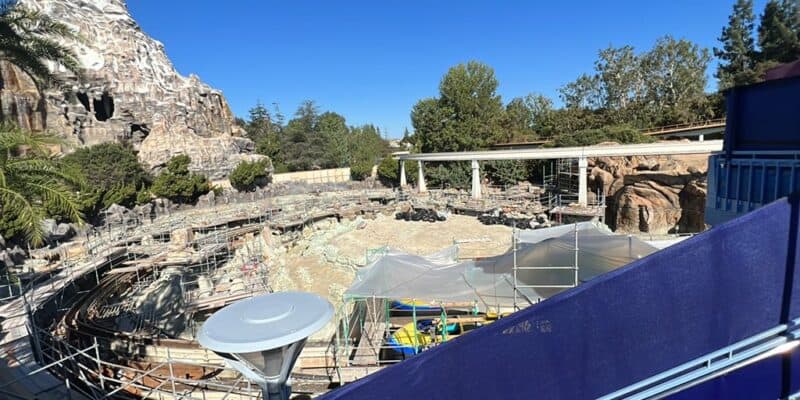 When Disneyland finally reopened after a historic 412-day closure, not all of the attractions in the theme park opened with it. One of the attractions that remained closed was the Finding Nemo Submarine Voyage, which can be found next to Autopia. The area is well-known to Guests, who can walk by and see the funny seagulls from Finding Nemo (2003) standing on the rocks and shouting “mine”.

Guests walking by the Finding Nemo Submarine Voyage have seen signs posted since April saying that the attraction is closed and will not open until this Winter. Until now, the construction walls had kept what was happening behind the scenes unknown to Guests, but now we can finally see just how much construction is actually going on.

The Disneyland monorail finally reopened after also being closed since the park opened in April, which takes Guests into the heart of Disneyland Park and lets them off right by the Finding Nemo Submarine Voyage. From the elevated angle, Five Fires YouTube was able to snap some pictures to share on Twitter and we can see that the water area of the submarine ride has been completely drained!

Here is more information on the Finding Nemo Submarine Voyage from the Disneyland Resort website:

Finding Nemo Submarine Voyage first opened at Disneyland Park in 2007 — replacing the original Submarine Voyage attraction that had opened in 1959. Disney has not said if the attraction will have any restrictions when it reopens due to the fact that it traditionally holds a number of people in a small, confined space.

Do you love Finding Nemo Submarine Voyage? Let us know in the comments!