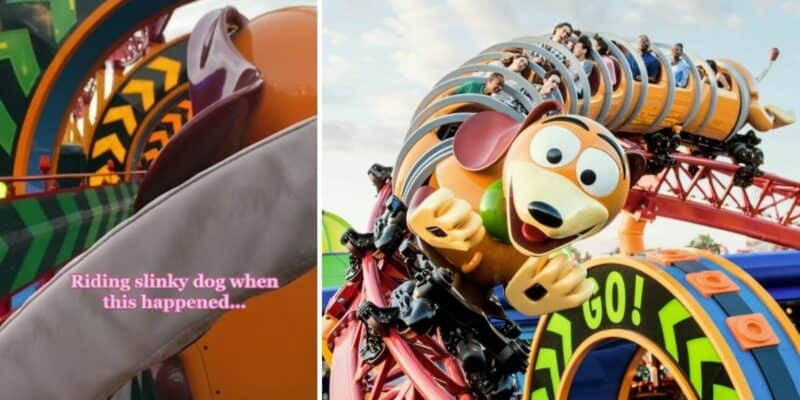 Currently celebrating its 50th anniversary AKA The World’s Most Magical Celebration, the Walt Disney World Resort in Central Florida is welcoming all fans to come and take part in this momentous occasion.

For some visitors at Disney’s Hollywood Studios recently, one hugely popular — if not the most popular on some days — attraction broke down during the full-speed launch, stunning those riding it.

With new nighttime spectaculars like Cinderella Castle’s Disney Enchantment at Magic Kingdom Park and Harmonious at EPCOT’s World Showcase, as well as the new, albeit controversially comical, daytime show — Disney KiteTails — at Disney’s Animal Kingdom, the 50th anniversary celebrations at the fan-favorite Disney Resort are showcasing the Disney magic in an utmost way. Even the water park, Disney’s Blizzard Beach and retail area Disney Springs are getting in on the fun, and there’s the rumors that Typhoon Lagoon Water Park is gering towards an imminent opening.

That’s not to say The World’s Most Magical Celebration has had its hiccups. Guests are still coming to terms with the all-new FastPass+ replacement, the paid-for Disney Genie+, and Individual Lightning Lane Selections as part of the Disney Genie rollout. As an additional item on top of their theme park ticket, Guests can use the speedy Lightning Lane entrance to ride attractions like Remy’s Ratatouille Adventure at EPCOT, Space Mountain, Haunted Mansion, or the ever-popular Star Wars: Rise of the Resistance at Star Wars: Galaxy’s Edge.

As a matter of fact, Star Wars: Rise of the Resistance is one of the select attractions that are not available on Disney Genie+, and instead, this attraction must be chosen as an Individual Lightning Lane Selection; joining the Star Wars attraction as Disney’s Hollywood Studios’ pairing of exclusive rides is Mickey and Minnie’s Runaway Railway. But, one equally popular attraction, Slinky Dog Dash over at Toy Story Land, isn’t an a la carte selection and instead can be ridden using Genie+. It is this ride that caused an issue this past week as Guests were left stunned following a launch malfunction.

Taking to TikTok, Magically Savannah (@magicallysavannah) shared the moment it happened, captioning the video by saying “Trouble on Slinky”:

The video shows the rollercoaster drawing back as normal, preparing for the high-speed launch, but just a few seconds after setting off, the attraction comes to an abrupt halt with Guests’ shock heard in the form of shouts and small screams. From the comments of TikTok we can ascertain that the Cast Members operating the popular attraction, reset Slinky Dog Dash and allowed Guests to experience the thrilling launch as it was meant to be experienced.

While a Disney Park is one of the most magical places a fan can visit, there are the occasional issues when it comes to attraction breakdowns and even — as Guests saw this recent week — moments when the magic is completely shattered and emergency vehicles storm Main Street, U.S.A. to combat a fire near Cinderella Castle. One attraction that seems to experience a lot of issues is another Hollywood Studios favorite — Rock ‘n’ Rollercoaster Starring Aerosmith. Just this year we have seen two recorded evacuations involving the “highest hill” with the lights coming on and Guests being escorted down many stairs to exit the show building.

Another attraction that faces multiple issues is the boat ride, Pirates of the Caribbean, both in Walt Disney World and Disneyland Resort. The latter’s version of the ride saw firefighters tend to Guests trapped in the boats for up to 90 minutes after an extended breakdown.

Have you ever experienced an attraction malfunction while on a Disney World vacation? Let us know in the comments down below!