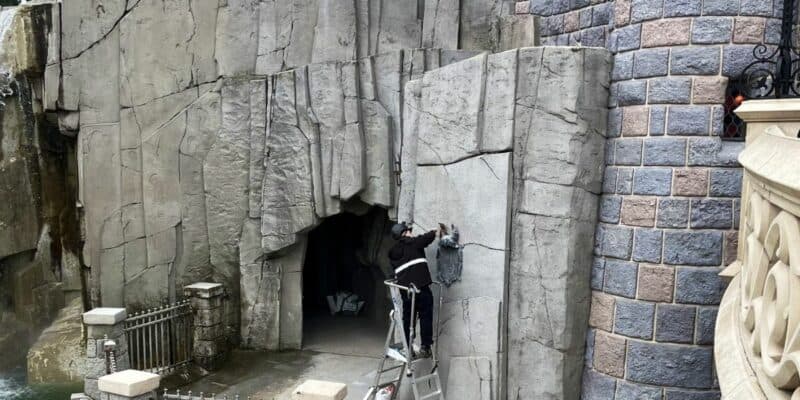 At Disneyland Paris, we have seen a ton of changes being made as both Disneyland Park and Walt Disney Studios prep for the 30th anniversary celebration, which will take place in 2022.

One of the biggest refurbishments we have seen at Disneyland Park was on Sleeping Beauty Castle. Sleeping beauty Castle was covered in what almost looked to be decorative boxes for a chunk of the year as Disney attempted to refurbish the castle while also making sure that the iconic weenie (as Walt would call it) was not causing too much of an eyesore for Guests. Considering many who vacation at Disney love to take the iconic castle photo, covering up said castle is always a challenge and a race.

At Disneyland Paris, much like Disneyland Resort in California, Guests can walk through the castle and experience an attraction. At Walt Disney World Resort, Guests can only eat in the base of Cinderella Castle at Cinderella’s Royal Table, which is a much more expensive experience.

At Disneyland Paris, the attraction is titled La Tanière Du Dragon and is described as:

Tip-toe through the dark dungeon “La Tanière du Dragon” underneath , where a monstrous prisoner lurks. Once the ruler of the skies, this defeated dragon lies chained against jagged rocks. It may be dozing, but tread carefully, as one false move will lead to a hot, rumbling surprise.

DLP Report (@DLPReport) Tweeted a photo of the attraction entrance as it is now receiving final touches before reopening this Saturday!

Final touches at “La Tanière Du Dragon”. The walk through Attraction is scheduled to reopen on Saturday.

🔧 Final touches at “La Tanière Du Dragon”. The walk through Attraction is scheduled to reopen on Saturday. pic.twitter.com/1Is8eJf2kw

What do you think of the new castle refurbishment? Let us know in the comments below!