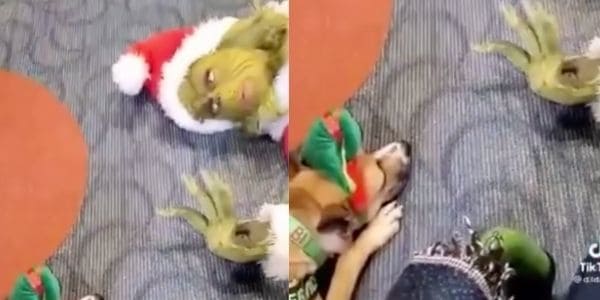 Meeting The Grinch at Universal Studios isn’t just a fun thing for humans to do.

As many Guests probably know, the holiday festivities are in full force at the Universal Studios Parks. During special seasonal occasions, the Universal Parks offer a number of limited-time experiences for Guests who are visiting during the holidays. One of the most famous offerings would have to be the chance to meet and interact with the one and only Grinch during Grinchmas. During this time, Guests can experience “Warm fuzzies with a side of sarcasm” as they get up close and personal with Grinch.

Apparently, The Grinch likes to talk to dogs (they probably remind him of his own “Max.” In an incredibly cute video that was posted on TikTok, a Guest’s service dog can be seen laying on the floor while The Grinch lays beside it, talking as if the dog can understand him (maybe it can?). “You look like you’re having the same kind of day I’m having, “jokes The Grinch.

We have covered funny interactions with The Grinch at Inside the Magic, even catching him being arrested. Meeting him looks like a blast for any Guest visiting Universal Studios during the holidays, so don’t miss out!

Prices, times, dates, entertainment, event and/or experience details are subject to changes and/or cancellation without notice.

Have you met the Grinch during Grinchmas at Universal Studios? What’s the funniest thing you’ve heard him say?