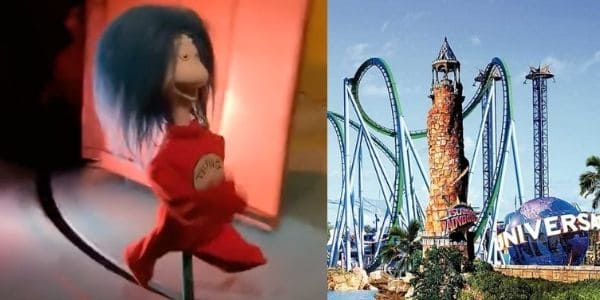 If beauty is in the eye of the beholder, then so is fear.

All of the Universal Studios Parks across the world offer an entire slew of rides and attractions that give Guests some fun, entertaining and thrilling experiences. While there are certainly some scary rides like Revenge of The Mummy: The Ride and Harry Potter and The Forbidden Journey, most of the rides at the Universal Studios Parks are fun for the whole family. One ride’s scare factor might surprise you however as shown in a viral TikTok.

The Cat In The Hat ride at Univeral Studios in Orlando, FL, is a fun and family-friendly attraction that takes Guests on a journey through the classic Dr. Seuss story. However, there is a certain creep factor that’s present in Dr. Seuss’s stories, especially when looking at Foo-Foo the Snoo, the Grinch, and, as seen on this ride, Thing One and Thing Two. In a TikTok that went mega-viral garnering over 14 million views and over three million likes. As soon as the robotic Thing One and Thing Two attractions pop out on the ride, screams of pure terror can be heard at spine-tingling volume from guests. See the TikTok from brianna (@briannacabezas1) below:

the scariest ride at universal

While this video was made in jest most likely, the sights of the Cat in The Hat’s mechanical helpers running toward the ride vehicle are quite unnerving if you think about it to much. Stormibaby134 commented:

“the shadow of it when it came out scared me”

The Cat In The Hat ride can be found inside Seuss Landing which is part of Universal’s Islands of Adventure Park in Orlando, FL. See Universal’s official description of the ride:

Who hasn’t wished they could disappear into a Dr. Seuss story? Now you can. Grab a seat and swerve this way and that through one of Dr. Seuss’s most beloved classics. Each scene has been vividly re-created with colorful characters and crazy motion as you twist from room to room, trying to clean up after The Cat in the Hat™ before Mother comes home.

Seuss Landing is Universal’s version of a children’s area and offers many attractions and merchandise designed for younger ones. Guests can see some of their most beloved Dr. Seuss characters in person, including The Cat in the Hat™, Sam I Am, Thing One™ and Thing Two™, and The Grinch™. While we covered the potential retheming of this land due to the controversial books from Dr. Seuss, the land still remains open to this day.

What ride makes you scream like the Guests in the TikTok? What do you think is Universal’s scariest attraction?