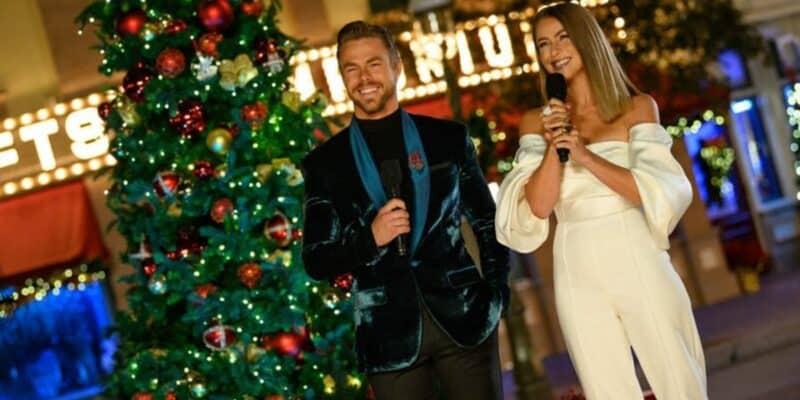 The Magic Kingdom in Walt Disney World got the star treatment yesterday when Dancing with the Stars icons Julianne Hough, and Derek Hough danced for a TikTok in front of the recently updated Cinderella Castle.

Dancing to Leroy Anderson’s classic Christmas tune “Sleigh Ride,” both Julianne and Derek, as well as Dancing with the Stars alumn Hayley Erbert got into the holiday spirit with what could only be described as an upbeat and energetic dance that was uploaded on Derek’s official TikTok account, with the original post now has over five million views and over four hundred thousand likes!

Julianne could be seen rocking some absolutely-adorable fuzzy slippers, something we all wish we could pull off when visiting Walt Disney World.

Other celebrities have stopped by Walt Disney World to check out the festivities recently. Marvel’s Chris Evans (Steve Rogers/Captain America) was spotted celebrating Thanksgiving early with family at Disney’s Magic Kingdom Park. Media superstar Kylie Jenner also visited Disney’s Magic Kingdom, where Cast Members had to shut down “it’s a small world” so she and her family could ride the attraction alone.

As we have covered before many times before, celebrities love to spend time at Disney’s lineup of Parks and Resorts just as much as we do, and with the 50th-anniversary celebrations in full swing at Disney’s Magic Kingdom as well as the holidays being just around the corner, now has never been a better time to take a trip to Walt Disney World.

Would you be brave enough to film yourself dancing at Walt Disney World?