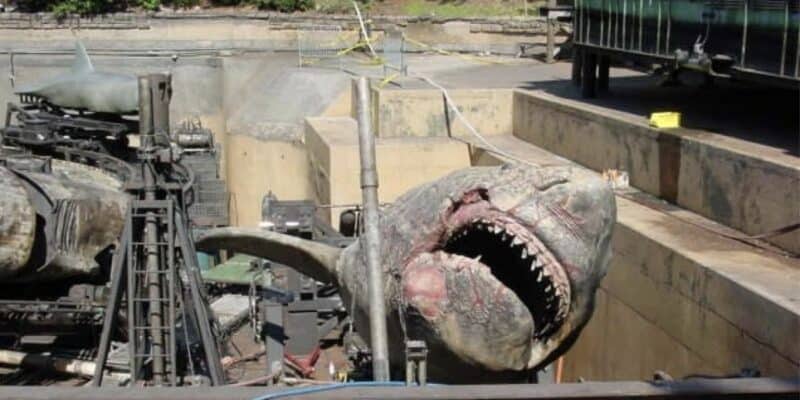 If you are a fan of Steven Speilberg’s 1975 classic film, Jaws, you likely found a way to get to Universal Orlando Resort at one point in time to ride the terrifying attraction.

In the ride, Guests would board a ship that felt a lot like Magic Kingdom’s Jungle Cruise as a Team Member would lead you through the shark-infested waters. Once Jaws was in the area, Guests would experience terrifying jump scares as the villainous shark would jump from the water to attack the boat.

The ride was placed at Universal Studios Florida and quickly became a fan favorite for many. The ride first came in 1990 to Universal, but in 2012, it was removed. Because Jaws took up a lot of space in the area, it became a prime candidate when it came to finding something to remove so that Harry Potter and the Escape from Gringotts (The Wizarding World of Harry Potter) could be built.

That being said, just because the ride is gone, does not mean it was forgotten. We have covered unearthed photos of the attraction in the past, and today, thanks to Creative Director Rob Bloom (@robbloomcw), we have more to see! If we take a look at the photo below, we can see a drained Jaws attraction with two of the Bruce animatronics in view.

The one in the back would just serve as a warning to the Guests on the ride, with his top fin sticking out of the water, and the terrifying blood-covered shark would get up close and personal with Guests. Although it was not said, from the photo, it looks as if this was taken when the ride was being demolished.

Because Jaws was an attraction that had mechanics taking place underwater, the ride often experienced a lot of technical issues, which may have been another incentive to use its space for another attraction that would generate more foot traffic to the Park.

There have been animatronics of Bruce found in someone’s backyard in the past. Although we cannot confirm that it came from the Universal attraction, the animatronics look exactly like the ones pictured above. Now, Guests can still have a small taste of JAWS (or, the other way around) as Bruce hangs near the old attraction entrance as a photo-op! There is also still plenty of JAWS merchandise available around the Park.

Soon, the next attraction to join Jaws’ fate will be Shrek 4-D which will be giving its final showing in January before it is shut down for good. Aside from that, Revenge of the Mummy will close for a lengthy refurbishment, but thankfully will eventually reopen!

Personally, I think it would be awesome to bring Jaws back into Universal through Halloween Horror Nights in the future, but that is just a selfish pitch from me!

Are you sad Universal no longer has the Jaws attraction at the Park?