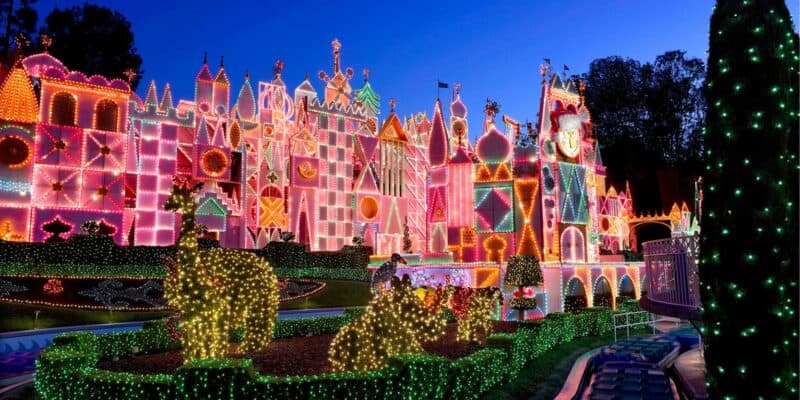 The attraction was also recently flooded, delaying the debut. Read more on that here.

Now, not only will Guests be able to enjoy the stunning exterior, which is lit to the nines with lights, but the festive interior, as well. Disneyland describes the attraction as:

An Exuberant Holiday Experience
Set sail along a wondrous wintry waterway transformed with whimsical décor. Behold jubilant regional adornments all along your world tour of good cheer. Listen as the costumed chorus of children sings the classic “It’s a Small World (After All)” song and traditional holiday tunes. Listen for the South Sea mermaids who sing “Jingle Shells” and leave a plate of fish for Santa.

At Magic Kingdom in Walt Disney World, Guests can also enjoy a holiday makeover on a classic attraction. The Jungle Cruise, which recently revamped its storyline to a much more culturally appropriate one, has now entered the holiday season with the Jingle Cruise storyline.

Disneyland does not stop at attraction layovers when it comes to the holidays, either! Disney Merriest Nites is a party that has already sold out, and with the rave reviews which we have heard, it is no surprise that the limited six party nights were snagged by Guests. The event includes:

Will you be celebrating the holidays at Disneyland this year?