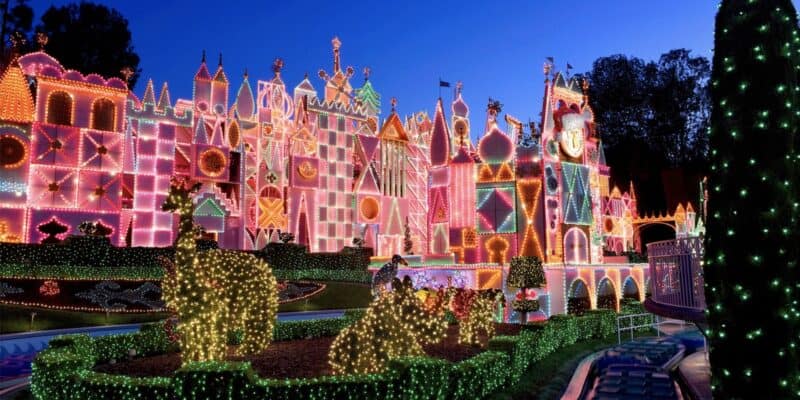 Interesting news coming out of Disneyland Resort as we have learned that the classic boat ride, “it’s a small world” has flooded. The attraction featuring a holiday layover is scheduled to be part of Disneyland Park’s new, highly anticipated “Disney Merriest Nites” after-hours event. The sold-out, special-ticket holiday event debuts tonight, Thursday, November 11, 2021… but Guests won’t be able to ride the attraction.

“it’s a small world” Holiday is an experience Disneyland Resort offers for the holiday season. Disney notes the attraction holiday layover as “An Exuberant Holiday Experience” as:

Set sail along a wondrous wintry waterway transformed with whimsical décor. Behold jubilant regional adornments all along your world tour of good cheer. Listen as the costumed chorus of children sings the classic “”it’s a small world” (After All)” song and traditional holiday tunes. The enchantment begins as you approach the iconic façade, which is adorned with thousands of shimmering lights for the season.

The holiday version of “it’s a small world” was supposed to debut tonight (November 11) to Guests for the very first Disney Merriest Nites, then be made available for all Guests as the Disneyland holiday season kicks off during normal operating hours on Friday, November 12. An unexpected flood however has changed those plans.

According to a report from the OC Register, Disney officials have shared that flooding occurred during the process of refilling the flume on “it’s a small world” at Disneyland Resort. When the flooding occurred, it affected machinery used to operate the attraction during the early morning hours on Wednesday, November 10 while Disneyland was closed to the public. Disneyland officials have said that they realize the popular ride closure is a disappointment and have teams working around the clock to get the attraction up and running as soon as possible.

No estimated reopening date has been announced for Disneyland’s “it’s a small world” attraction, but we hope the flood damage can quickly be repaired.

Do you have plans to attend tonight’s Disney Merriest Nites? Hopefully, the fan-favorite attraction will reopen soon!