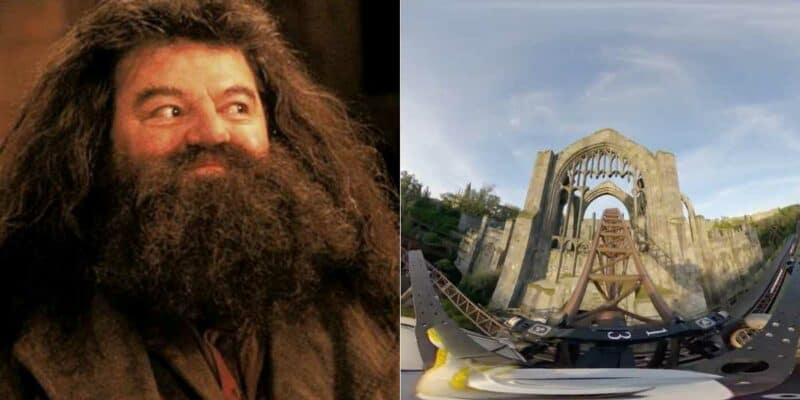 If you’re a Harry Potter fan, you may know that Professor Rubeus Hagrid recently celebrated a birthday! That’s right, Hagrid, the fictional character from the Harry Potter novel series turned film franchise celebrated his birthday on December 6. Of course, Universal Orlando Resort didn’t want to let the day get away without a special mention.

While we are HUGE fans of Universal Orlando Resort’s neighboring competition, Walt Disney World Resort, we must say if there is one ride at Universal that wows us with a Disney-theming standard… it’s Hagrid’s Magical Creatures Motorbike Adventure.

If you’ve never been on the Hagrid’s Magical Creatures Motorbike Adventure, get ready to join Hagrid and fly into the Forbidden Forest! Universal‘s description of the extremely popular attraction goes on to say:

The attraction is an absolute blast and one we highly recommend riding multiple times if possible. Whether you’ve been on the attraction or still haven’t joined Hagrid for a ride since the attraction opened to Guests in June 2019, get ready to ride along via the video below.

While riding along on the screen is all well and fun, It’s time to make plans to head to The Wizarding World of Harry Potter – Hogsmeade in Universal’s Islands of Adventure. Happy Birthday, Hagrid!

Have you ridden Hagrid’s Motorbike Adventure? If so, let us know you’re thoughts!