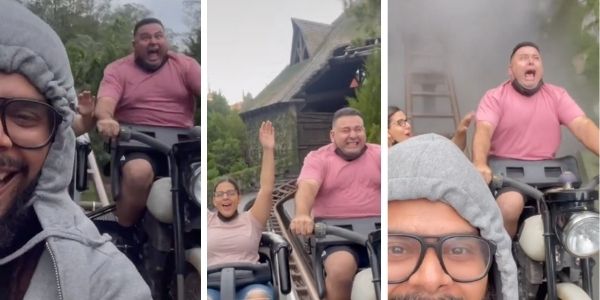 If you want thrills and you are in the Orlando area, visiting Universal Orlando Resort is a fantastic option for you! With both Universal Studios Florida and Islands of Adventure having bigger attractions that can make your stomach drop, you will surely kick that coaster itch when you visit.

The best things about these thrill attractions, however, is that they are still incredibly unique and immersive, so you won’t feel like you are just at your local amusement park. Both theme parks at Universal Orlando Resort now have the Wizarding World of Harry Potter in them. Almost all of the rides have a sense of thrill to them, but there is one that is arguably the wildest, and also, the most popular Harry Potter attraction Universal has to offer.

Hagrid’s Magical Creatures Motorbike Adventure is in Islands of Adventure. It is a coaster that has speed, drops, immersive elements, and backward tracks, which makes it one that can easily evoke screams from Guests. Most Guests have screams of joy, but some may be screaming in utter fear.

Gigising (@gigising) on TikTok posted a video of a Guest behind them on the coaster, and it seem that he is utterly terrified, which is unfortunate for him, but as a viewer, I cannot help but chuckle at the panic!

In the TikTok, you can see that when the coaster goes backward, the Guest is truly shocked at the change in direction! Of course, we can see that he is not in any real danger but just experiencing the rush of the ride! It should be noted, however, that Guests should not film on Universal attractions as noted by Universal Orlando Resort.

With Epic Universe under construction, many Universal fans are waiting to see if more Wizarding World fun will be announced for that theme park as well!

Are you a fan of Hagrid’s Magical Creatures Motorbike Adventure? Let us know in the comments below!