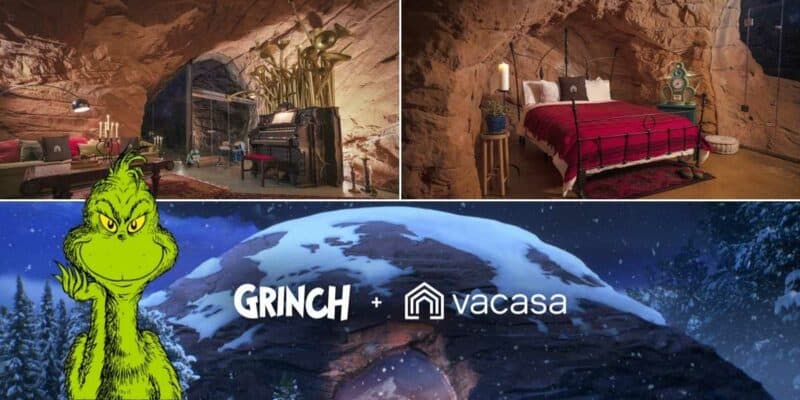 Calling all Grinch fans! Exciting news as Grinch’s cave has become a vacation rental. Yep, you read that right! A home/cave in Utah is stirring up all sorts of excitement with its perfectly designed Grinch lair theming.

We’re not sure Dr. Seuss knew just how popular the fictional character, Grinch, would be when he first created the Christmas-hating main character in the 1957 children’s book How the Grinch Stole Christmas!. Now 64 years later, we’re still in love with the Grinch and can’t get enough of Grinch film adaptations and even having a chance to meet Grinch at Universal Orlando Resort. But, can you imagine staying in his cave?

Just north of Who-ville (or actually Boulder, Utah), Grinch fans will now find a one-of-a-kind holiday experience in Grinch’s fully functional cave home. The vacation rental opened for the holidays and Grinch fans flocked to the opportunity to stay Grinch-style!

The Grinch cave allows for four Guests to occupy the multi-level 5,700 square foot lair that is among the caves of Utah. It consists of 2 queen beds, 2 bedrooms, and 2 bathrooms. The cave holds several special Grinch touches such as the Grinch’s organ, coffee maker, books, and more.

Along with the main bedroom and Guest bedroom, Guests will also find a study and music room. There is also a fully functioning kitchen which is stocked up with some of Grinch’s favorites like Who-has, Who-pudding, roast beast, and more.

The vacation rental boasts a clean cave that Guests will have to themselves, as the Grinch has decided to spend his holidays far away from any holiday cheer.

Keep in mind, the Grinch admits the property is rather remote so bring food and beverages for your entire stay. Be sure your car is well prepared for a four-wheel drive to reach the cave. Plus, there is no internet or cable, so plan to enjoy Grinch’s music and library. And want to hang out on your cell? A phone is available on site, but don’t expect your cell to get service.

RELATED: The Grinch Yells at Universal Guests to Get Out of The Park

Holiday season bookings were previously available for limited stays from December 13 through 23 at a steal of a nightly rate ($19.57) in honor of the book’s original release year. Sadly, the vacation rental is now FULLY BOOKED for this year. The Grinch has offered a stunning virtual tour option for fans to enjoy.

Would you stay in the Grinch’s cave if you were given the opportunity? Let us know in the comments!