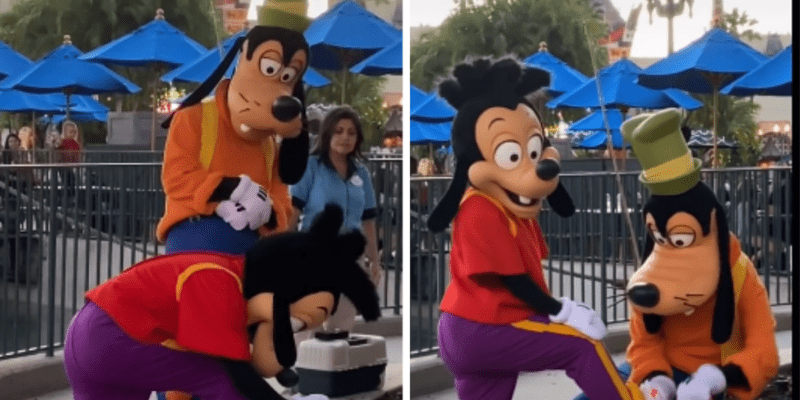 If you know anything about Goofy, it’s that he’s a good dad.

Being a single parent isn’t easy and though Goofy certainly has his hiccups and strange moments, he is always there for Max whenever he needs him.

Those awesome dad skills were on display at Disney’s Hollywood Studios.

TikTok user @thejuliakloss posted a heart-warming video of Goofy taking time to tie Max’s shoes in the Park. They said:

♬ The Good Ones – Gabby Barrett

In the video, we can see that Max is having trouble tying his shoe. Goofy sits down on the ledge and ties Max’s shoe to make sure he doesn’t trip or fall as he makes his work through the Park.

Goofy and Max are known for their role in Disney animated cartoon series throughout the years and have been a part of two full-length feature film spinoffs in A Goofy Movie (1995) and An Extremely Goofy Movie (2000).

Here is Disney Wiki’s complete description for A Goofy Movie:

A Goofy Movie is a 1995 animated musical adventure comedy-drama film, produced by Walt Disney Television Animation and released to theaters by Walt Disney Pictures. It features the characters from The Disney Afternoon television series Goof Troop and is explicitly part of the show’s canon. It can also be considered a road trip movie.

The film’s plot revolves around the father-son relationship between Goofy and Max heading for disaster as they struggle to find common ground despite Max’s persistence in having his own life and winning the girl of his dreams. As a result, they go on a road trip so both can have a bonding relationship. A direct-to-video sequel, titled An Extremely Goofy Movie, was released in 2000.

Meeting characters at a Disney Park — whether it be at Magic Kingdom, Disney’s Hollywood Studios, EPCOT, or Disney’s Animal Kingdom– is a unique and magical experience, and it makes the magic even more special when we see them acting exactly how we see them in the movies.

What is your most memorable character meet-and-greet at Walt Disney World Resort or Disneyland Resort?