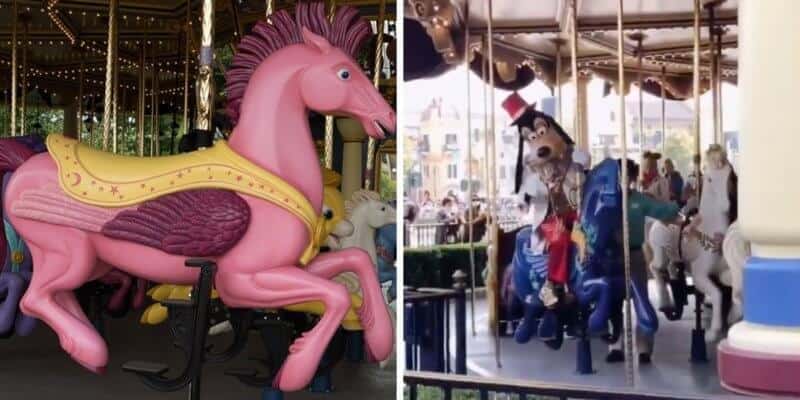 If you’re a Disney Parks veteran, then you know that on some rare occasions, Disney will surprise us. You might find an exclusive character meet and greet pop-up at the parks or spot a rare character roaming around Main Street, U.S.A.

The latest surprise one Guest caught on video was a famous Disney character riding one of Disney’s beloved attractions — Fantasia Carousel at Shanghai Disneyland!

Disney characters join in the fun

This is a sight to see for many Guests at the park. Many characters are scheduled at certain places and times, so seeing our adored Disney characters living their best Disney life is a treat!

This isn’t the first time Disney Guests have spotted a Disney character enjoying a ride with other Guests. Just recently, Guests in Shanghai Disneyland spotted Mickey Mouse riding Dumbo, which you can read more about here!

And in 2019, Twitter user E. Schuman (@theericshuman) expressed that he thought the only time characters would ride attractions were for promotions. But his dreams came true when he watched Alice and Mad Hatter join Guests on The Mad Tea Party attraction:

in all my years of disney fandom, i had only ever seen characters riding attractions with guests in promotional videos. friends let me tell you this is real magic.

in all my years of disney fandom, i had only ever seen characters riding attractions with guests in promotional videos. friends let me tell you this is real magic. pic.twitter.com/wzvTZdmBkB

Shanghai Disneyland’s Fantasia Carousel debuted in 2016 and is inspired by the classic Disney film, Fantasia! This magical carousel carries over 60 gorgeous flying horses and is located just inside the Gardens of Imagination. Shanghai Disneyland describes the ride as:

Enter an enchanted world where Zeus, Bacchus and a cast of colorful characters invite you—and your imagination—to soar.

From flowering trees reminiscent of the Elysian Fields of Mount Olympus to the painted murals of the Pastoral Symphony, every last detail of this classic attraction is imbued with the spirit of Walt Disney’s timeless masterpiece, Fantasia. Released in the U.S. in 1940, the film’s illustrious score and animated imagery provide a sublime backdrop that helps bring this fan favorite to life.

Have you seen any Disney Characters ride your favorite Disney attractions? Let us know in the comments below.

Do you need help planning your next Disney vacation? Our friends at Academy Travel are EarMarked Diamond! Click the link for more information!

Comments Off on Goofy Spotted Riding a Disney Attraction With Guests!