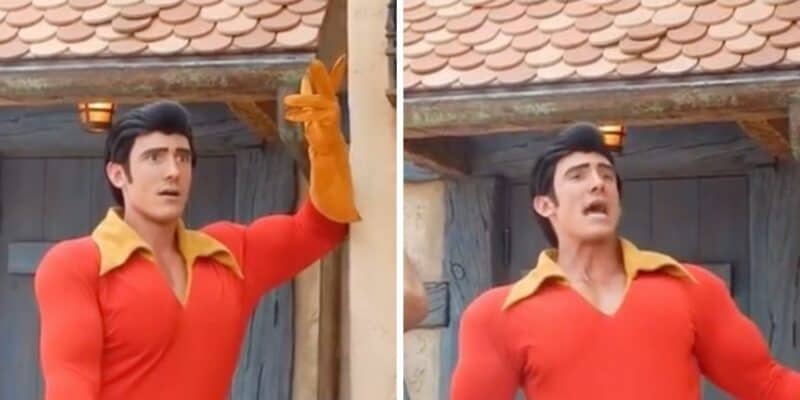 Meeting Disney characters at the Parks is one of the most memorable activities Guests can do. One of the more popular characters Guests love to meet is Gaston from Disney’s animated film, Beauty and the Beast.

Gaston is fun, charismatic, and really loves interacting with Guests. We have reported on interactions with Gaston calling a Guest his “insignificant other” as well as hilariously roasting another. Well, another video is now making its rounds on social media — this time showing Gaston yelling at a Disney World Guest for climbing on his fountain.

In a video posted to TikTok, we can see Gaston is getting ready to take a picture with a Guest when he suddenly steps away and starts yelling. He is visibly upset as he spotted a Disney World Guest climbing on his fountain.

“Get down!” Gaston yells at the beginning of the video before walking towards the fountain and away from his meet and greet spot. “Get off my fountain,” he continues to scream.

You can see the full video below. We do want to note that this video is older as Gaston is not currently meeting Guests at Disney World due to the ongoing pandemic.

Climbing on structures or buildings is not safe as Guests could fall and hurt themselves or anyone around them and is actually against the rules and regulations at the theme parks. The official Walt Disney World website states the following:

Therefore, the Guest that was climbing on the fountain was breaking the rules. It seems as though Gaston was not trying to actually hurt the Guest’s feelings, but instead was trying to stay in character while also telling the Guest he must get down off the fountain for their own safety.

Have you ever met Gaston at the Disney Parks? Let us know in the comments below.

Comments Off on Video: Gaston Yells at Disney Guest For Disrespecting His Property