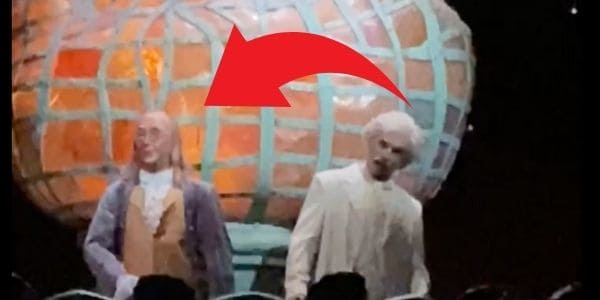 Guests were in for quite an “adventure” when an attraction malfunctioned last month.

The amount of rides and attractions at Walt Disney World as well as the international Parks is overwhelming, to say the least. Within Disney World’s four Parks, there are so many fun, thrilling and enjoyable experiences that Guests can choose from. And with so many rides and attractions, there’s bound to be an issue or two once in a while. A few weeks ago, Guests experienced a rather lackluster grand finale to EPCOT’s American Adventure when both animatronics failed to move and remained stationary as the curtains closed and the show ended.

Twitter user Aaron Wolf (@The AaronWolf) posted a video that shows the two main characters of the show, Benjamin Franklin and Mark Twain, remaining motionless as the show comes to a conclusion in what could only be described as a strange, almost creepy grand finale. Take a look here:

Massive #Disney Fail! The big climax of the American Adventure at Epcot Center and Ben (I call him Ben) Franklin and Mark Twain are both dead and motionless…

Massive #Disney Fail! The big climax of the American Adventure at Epcot Center and Ben (I call him Ben) Franklin and Mark Twain are both dead and motionless… #Epcot #DisneyFail #DisneyWorld @MiceChat @davekoenig @MousePlanet pic.twitter.com/YFQGO7RqL7

This attraction can be found at the American Pavilion in EPCOT’s World Showcase, and when it is working as intended, The American Adventure is an incredible tour through American history guided by two historical figures. Disney describes the attraction as a:

What do you think of this attraction failure? What was the weirdest experience you’ve ever had at a Disney attraction?

Comments Off on Disney Animatronics Get STUCK in Grand Finale “Fail”