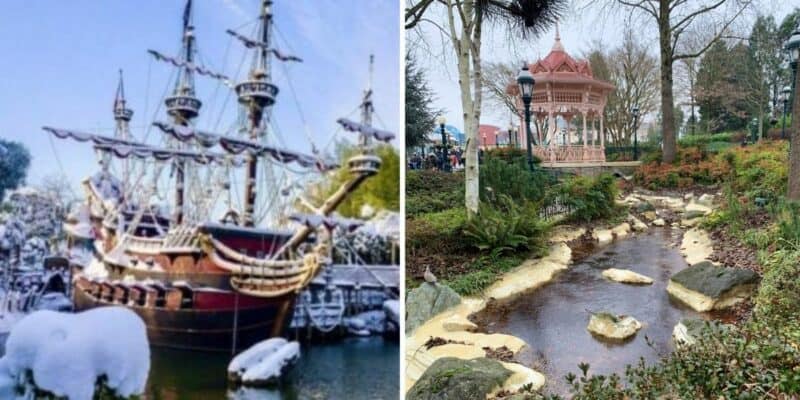 It’s one thing to see snow when visiting a Disney Park, but ice is a whole new story!

When we say that it snowed at Disney, many people are often shocked at the statement, as many fans associate Disney with Disney World, which is located in Orlando, Florida, the sunshine state. Considering Florida has a climate that could melt snow (and ice cream cones) faster than you can walk from Casey’s Corner to Cinderella Castle, the idea of snow is crazy. Of course, snoap is an option, but there is a clear difference between fake snow and real.

Around the world, however, there are many more Disney Parks that do indeed welcome snow! Disneyland Paris often experiences snowfalls during the winter, which leaves the Park looking like a picturesque dream world. The light snowfalls cover the attractions in a gorgeous way that makes us wish we could experience it more often. That being said, nobody wants to see any Disney Park become too cold.

DLP Report posted a photo of a river at Disneyland Paris, which has frozen over! It looks like Elsa got to the water overnight! It does not look like the ice is too thick, but there is clearly a layer of ice. Considering the temperature in Paris today was consistently at a freezing level, this is not a surprising outcome, but still interesting to see!

It’s a freezing morning at the Resort

❄️ It’s a freezing morning at the Resort! pic.twitter.com/TiUcPO58bB

Would you go to Disney in freezing temperatures? Let us know in the comments below!

Comments Off on Freezing Temperatures Leave Disney Park in Ice