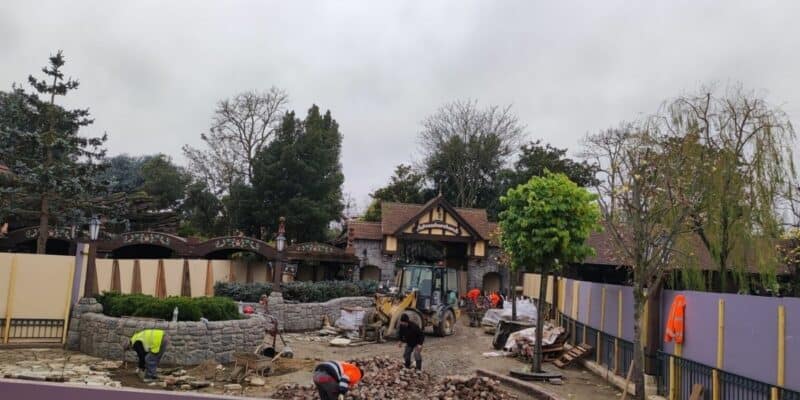 The Disney Parks are always finding new ways to innovate their theme parks so that Guests can always see Disney with their best foot forward. At times, this could mean expanding a Park, or even a simple refurbishment to ensure that things are not looking worn out can go a long way.

At Disneyland Paris, we have been seeing a ton of work done at Disneyland Park and Walt Disney Studios, as the 30 anniversary is now only a few months away. “it’s a small world” is currently closed for a year-long refurbishment, Sleeping Beauty Castle was just redone with more touch-ups ongoing, the Orbitron went under a massive refurbishment, and soon Fantasyland will be complete.

Disney Cave 0f Wonders (@Cave0fWonders) Tweeted photos of some of the completed groundwork in Fantasyland. The English translation reads:

The renovation of the Fantasyland floor on the “Carrousel de Lancelot Carousel horse” side has now been completed.

However, that is not the case for all of Fantasyland. NTDLP (@nt_dlp) Tweeted:

In the photo, we can see a ton of work is still needed to complete the new brick flooring, but luckily, we can also see that the finished product looks fantastic!

What do you think of the Fantasyland Refurbishment? Let us know in the comments below!