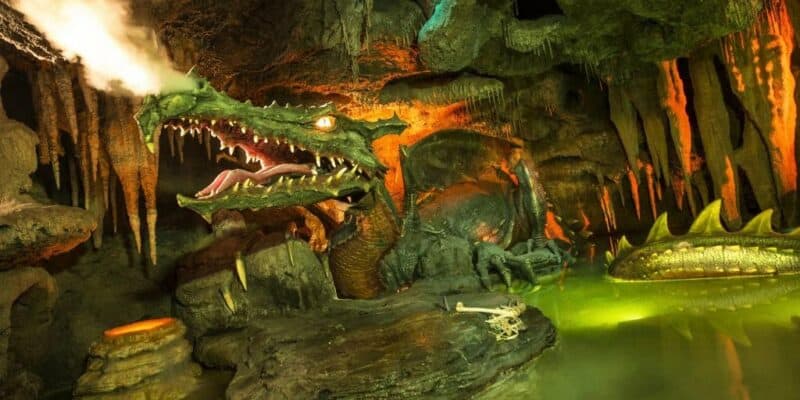 Disney is known for offering Guests countless amazing and fun experiences at all of its Parks across the globe. Whether it’s the incredibly themed attractions like Walt Disney World’s Flight of Passage at Pandora – The World of Avatar, Star Wars: Rise of the Resistance at Star Wars: Galaxy’s Edge, or the high-quality entertainment like Fantasmic! or Disneyland Paris’ Illunimations, all of the Disney Parks and Resorts feature high-quality entertainment. And speaking of Disneyland Paris, a fan-favorite attraction just returned, featuring one of Disney’s scariest animatronics!

Disneyland Paris’ La Tanière du Dragon (The Dragon’s Lair) is an exciting walkthrough attraction that takes Guests underneath Sleeping Beauty Castle and puts Guests face to face with a chilling dragon animatronic. In a tweet that confirmed the reopening of the attraction by DLPReprot (@DLPReport), the dragon, as well as the entrance, can be seen.

La Tanière du Dragon closed earlier due to the refurbishment of Sleeping Beauty Castle which was part of Disneyland Paris’ long list of updates and refurbishments to attractions and rides. This list includes attractions like Sleeping Beauty Castle and the Orbitron and Nautilus rides. The fan-favorite nighttime show Illunimations also returned to Disneyland Paris in grand fashion just the other day.

Comments Off on Disney’s HUGE Animatronic Finally Returns to Park