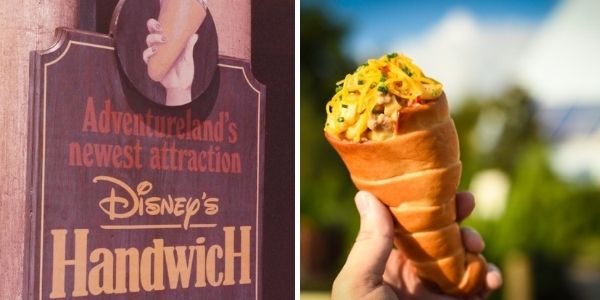 Is this old Disney food invention fun, creative, gross, or all of the above?

Disney is no stranger to creating new and exciting foods and treats for Guests to experience. In just the last few years, Guests have been given creative and unique things to try, like the cheeseburger pods from Satu’li Canteen at Pandora – The World of Avatar or the infamous blue and green milk found at the milk stands in Star Wars: Galaxy’s Edge. But perhaps the weirdest and most “out there” food inventions from Disney are those that have been forgotten and lost to time.

The late ’80s to early ’90s were a very interesting time for the Walt Disney World Resort, as things at the Parks seemed to change constantly. Things got edgier and more “grown-up” as both Hollywood Studios’ The Great Movie Ride and Magic Kingdom’s ExtraTERRORestrial Alien Encounter featured intense, close-up encounters with scary aliens. Then-Disney CEO Michael Eisner really tried to think outside the box and challenge what Guests had come to know and love about the Disney Parks. Perhaps one of the most strange and unexpected additions came in the form of Disney’s Handwich.

Labeled as “The sandwich of the future,” Disney’s Handwich was exactly that, a sandwich that could more easily be held in your hands (I thought sandwiches were already easy enough to hold?). The Handwich was made of a bread cone that was given one of four fillings: ham and cheese, pulled BBQ chicken, roast beef and cheddar, and tuna salad. When it was first released in 1988, Guests could find it at Epcot at the Farmer’s Market food court at The Land pavilion The Lunching Pad at Tomorrowland, and at Adventureland from time to time.

While this bizarre snack item was discontinued in the mid-1990s, the Handwich has seen a few limited-time returns in recent years, with a mac and cheese Handwich being offered for Epcot’s 35th Anniversary back in 2017. The Handwich has also served as the main inspiration for the cone wraps that are now served at the Cozy Cone Motel restaurant at Cars Land in Disney California Adventure.

What do you think of this crazy food invention from Disney? Would you try it?