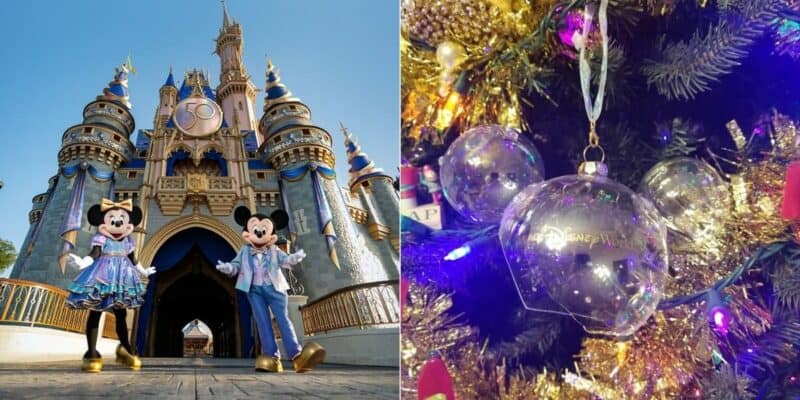 Walt Disney World Resort officially kicked off its 50th anniversary celebration — officially titled “The World’s Most Magical Celebration” — on October 1, 2021. With the official launch of the event, which will last into 2023, came LOTS of new Walt Disney World merchandise.

From new spirit jerseys to the vintage collection that recreates items from 1971 to the EARidescent line that celebrates Disney’s brand new color that was created just for the 50th anniversary, there is something for everyone.

For many Walt Disney World Resort Guests, Christmas ornaments from the Parks are among the most special souvenirs because they can help create magical holiday memories at home year after year.

The various 50th anniversary merchandise series that have been released so far offer no dearth of ornaments. One beautiful option is a blown glass Mickey Mouse ears ornament featuring the official Walt Disney World 50th anniversary celebration logo on one side and a small replica of Cinderella Castle — complete with its Golden Anniversary accents — inside.

One unsuspecting family found themselves shocked when their ornament — which was purchased during a September 2021 Walt Disney World Resort vacation — exploded while hanging on their Christmas tree [below].

Related: Disney World Characters Are Moving Back to Pre-Pandemic Locations!

According to the Guests, who shared the story with Inside the Magic:

“It sounded like something exploded and glass breaking. [When we looked], we saw it knocked bows [from the tree] onto the floor and I could see sparkles of glass all over the floor even with the lights off.”

The Guests also noted that, at first, they “thought the ribbon broke”, but quickly realized the thin glass had “exploded into lots of tiny pieces and shards of glass.”

The family — whose young grandchildren had been sitting near the Christmas tree right where the glass exploded earlier in the day — is in contact with Walt Disney World Resort about the strange occurrence. You can see a full photo of the ornament’s pieces below.

At this time, it is unknown if this has happened with other ornaments of this type, but be aware that this issue can seemingly occur.

Have you ever had a strange problem with Disney merchandise?