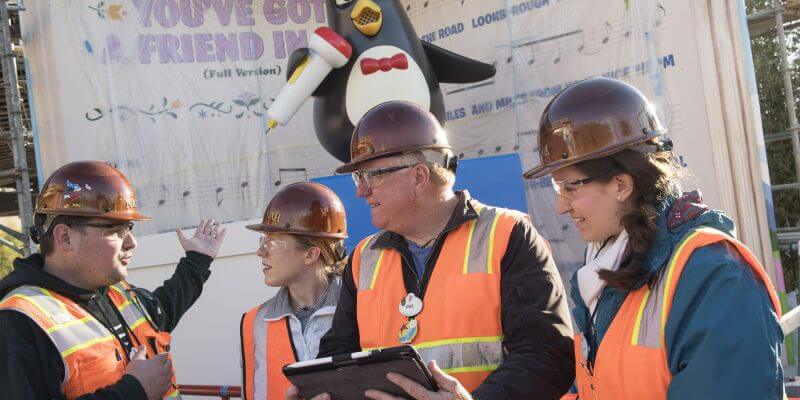 If you are looking forward to one day working for the Walt Disney Company as an Imagineer, we may be able to kick-start that journey for you! Join the ranks of John Hench, X Atencio, Bob Gurr, Claude Coats, Tony Baxter, Joe Rohde, Rolly Crump, and so many other talented individuals this summer!

Disney often has fantastic programs that they run at their Parks which allow others to come and work for the company. The College Program allows college students from all over the country to work at Walt Disney World and Disneyland, and then there are more programs such as the International Program, which Disney fans from around the world to work at Disney World, and more. The programs were all cut due to the pandemic, but now, we are starting to see them return.

On top of those options, Disney fans can also apply for professional internships where they will learn how Disney operates in their field of study, while also getting their foot in the door with the company. Of course, there is no guarantee that this will mean a job with the company after the internship comes to an end; it certainly can lead to more opportunities!

Now, the Walt Disney Careers section on the website is offering a plethora of summer Imagineering internships! Below is a full list of what is currently available.

The internships vary in location between Glendale and Anaheim in California, as well as Orlando, Florida. Interestingly, we are seeing more of the WDI internships available in California, even though Imagineering is being moved to Lake Nona in Florida.

This is what Disney has to say about Imagineering:

About Walt Disney Imagineering:
Founded in 1952 as WED Enterprises to design and build the world’s first theme park — Disneyland — Walt Disney Imagineering (WDI) is where imagination and creativity combine with cutting-edge technology to create unforgettable experiences. WDI is the creative force that imagines, designs and builds all Disney theme parks, resorts, attractions and cruise ships worldwide. Imagineering’s unique strength comes from its diverse global team of creative and technical professionals, who build on Disney’s legacy of storytelling to pioneer new forms of entertainment. The Imagineers who practice this unique blend of art and science work in more than 100 disciplines to shepherd an idea all the way from “blue sky” concept phase to opening day.

About The Walt Disney Company:
The Walt Disney Company, together with its subsidiaries and affiliates, is a leading diversified international family entertainment and media enterprise with the following business segments: media networks, parks and resorts, studio entertainment, consumer products and interactive media. From humble beginnings as a cartoon studio in the 1920s to its preeminent name in the entertainment industry today, Disney proudly continues its legacy of creating world-class stories and experiences for every member of the family. Disney’s stories, characters and experiences reach consumers and guests from every corner of the globe. With operations in more than 40 countries, our employees and cast members work together to create entertainment experiences that are both universally and locally cherished.

This position is with Walt Disney Parks and Resorts U.S., Inc., which is part of a business segment we call Walt Disney Imagineering.

Walt Disney Parks and Resorts U.S., Inc. is an equal opportunity employer. Applicants will receive consideration for employment without regard to race, color, religion, sex, national origin, sexual orientation, gender identity, disability or protected veteran status. Disney fosters a business culture where ideas and decisions from all people help us grow, innovate, create the best stories and be relevant in a rapidly changing world.

What position would you want if you worked for the Walt Disney Company?