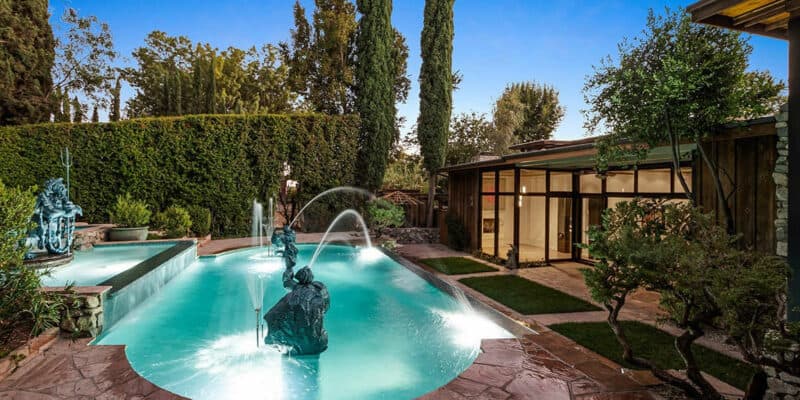 If you are a fan of Disney Imagineering, we have the perfect house for you.

Disney Imagineers are the reason we are able to see such intricate detail work in the parks, as well as the reason all of the big and little stories that lands and attractions are telling can come to life. Imagineers are able to see past the realm of reality and create something fantastical, which is why the Disney Parks are so magical. So how much would you pay to live in a house designed by a Disney Imagineer?

Fred Joerger, one of the Imagineers hand-picked by Walt Disney himself, helped create miniature models of things that we can see today at Disneyland Resort and more. Fred would take a drawing and turn it into something tangible, like Sleeping Beauty Castle and multiple sets for the Mary Poppins movie.

“I was given artists’ drawings of an interior set or a building and interpreted them into models. It’s very easy to make something like the Haunted Mansion look good on paper, but if you don’t get it into three-dimensions first, you may have a disaster. Well, my job was to create the model to avert disaster, which was fun, but a challenge.”

Disney legend Harriet Burns even said, “Most anything at Disneyland, Fred created as a model first.” Now, Fred’s former home in Los Angeles is for sale, and he designed it! The late Imagineer passed in 2005, and the house’s previous owner made sure to keep Fred’s vision of the house intact.

The description of the home is as follows:

The home, on a half-acre lot, has three bedrooms, three bathrooms, stained glass windows, frescos on the ceilings, an indoor waterfall and, of course, a wall made of rocks, to name just a few of its accoutrements. The primary bedroom has a closet with ceiling-high mirrors, and the kitchen is fully refurbished with new appliances yet keeps an old-school touch with a brick entryway and what looks to be an open-flame grill. An infinity pool in the backyard with Greek-inspired statues spewing water out of their mouths and tridents in their hands leaves a bit of a remembrance for the pioneer Imagineer.

It is being sold for $2.7 million, which does not seem like a price too high for a piece of Disney history located in Los Angeles!

Would you want to live in this house? Let us know in the comments below!

Comments Off on For $2.7 Million You Can Live in a House Built By One of Walt Disney’s Original Imagineers