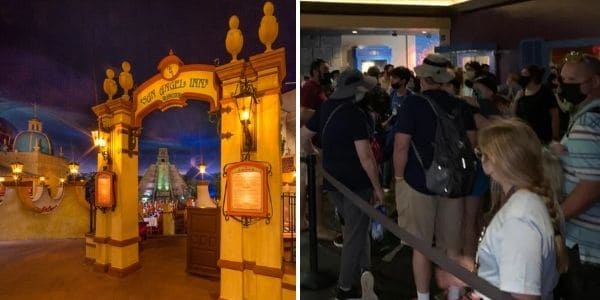 When visiting Walt Disney World, one of the most important things Guests will have to prepare for is the enormous crowds. All of the rides and attractions at Walt Disney World garner huge wait times vary, meaning at one point or another, Guests will have to wait for something. But one thing that might slip past most Guests is the lines into restaurants and even buildings, as shown on social media.

A recent Reddit post made the rounds on social media of a Guest facing a long line just to get into EPCOT’s Mexico Pavilion for dinner, presumably at Mexico’s San Angel Inn. See the full thread below:

LPT: during the holiday season, get to the Mexico Pavilion well ahead of your dining reservation. The line *just to get in* was about 15-20 min.

LPT: during the holiday season, get to the Mexico Pavilion well ahead of your dining reservation. The line *just to get in* was about 15-20 min. from WaltDisneyWorld

The post highlights the frustrations felt by many as they’ve forgotten to get in line early for their dining reservations. It seems when Disney World gets busy, Guests are sometimes forced to wait in lines just to get into a building, or worse, another line. User u/realitytvicon shared their experience in October:

The real pro tip is to get a margarita before standing in line, then by the time your inside you’re ready for your next marg.

User u/NRM1109 posted an actually-useful tip to help get to your dining reservations quicker:

You can tell a cast member you have a reservation and they will let you in.

Disney has tried to combat long lines with its Genie+ and Lightning Lane system at the Disneyland and Walt Disney World Resorts, but the jury is still out on how well those have been implemented in the Parks as of now.

Disney World’s San Angel Inn Restaurante at EPCOT’s World Showcase is described as a beautiful restaurant in “perpetual twilight, modeled after a 17th-century hacienda at the base of Mayan ruins”. It should be noted that these lines have been apparent during the entire pandemic, and often end up backed up like this when the Parks are at a higher crowd level.

Do you have any tips or tricks to avoid the lines at Walt Disney World? What’s the longest you’ve had to wait while at Disney World? Let us know below!