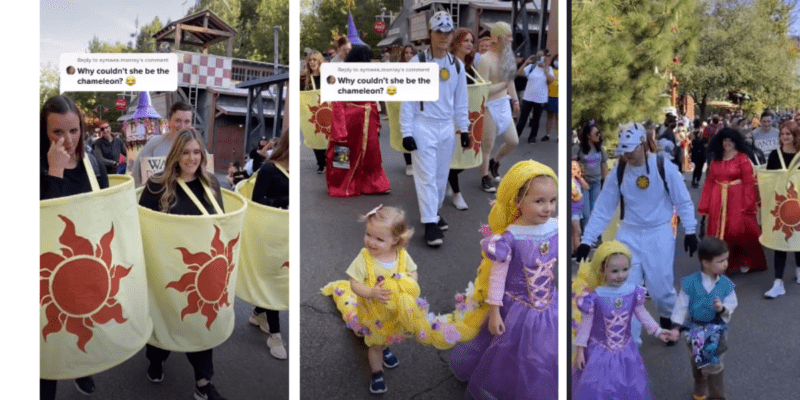 Creating memories that last a lifetime is exactly what Walt Disney World Resort and Disneyland Resort are all about.

Family members, both young and old, have an opportunity to experience the magic, and sometimes they create a little bit of their own.

TikTok user @ toystorydad_ shared an adorable video of an entire family who got into the Disney spirit with their costumes.

Reply to @aymeea.monroy Her baby brother was Pascal 💚

Reply to @aymeea.monroy Her baby brother was Pascal 💚

In the above video, we can see a family of more than 15 who decided to dress up from the popular movie Tangled (2010) and make their way around the Parks.

From Rapunzel to Pascal to Flynn Rider to Mother Gothel the castle itself and everything in between, they’ve got the entire movie covered.

As they made their way through the Park, you can see Guests move to the side and take pictures and videos, essentially making their own Disney parade.

Tangled is a 2010 American computer-animated, musical fantasy film produced by Walt Disney Animation Studios, based on the story Rapunzel by the Brothers Grimm, starring Mandy Moore and Zachary Levi. It is the 50th animated feature in the Disney Animated Canon, and was released on November 24, 2010 in North America. The film is telling the story of the long-lost princess Rapunzel, who yearns to leave the confines of her secluded tower for an adventure. Against her foster mother’s wishes, she accepts the aid of a handsome intruder, Flynn Rider, to take her out into the world which she has never seen.

Speaking of parades,  Disney recently announced that from December 22 through to the end of the month on December 31, Magic Kingdom Guests will be able to see Mickey’s Once Upon a Christmastime Parade, twice a day. Festival of Fantasy is also set to return to Magic Kingdom next year; however, an exact timeline has not yet been announced.

Have you ever worn a costume with family members or friends to a Disney Park?