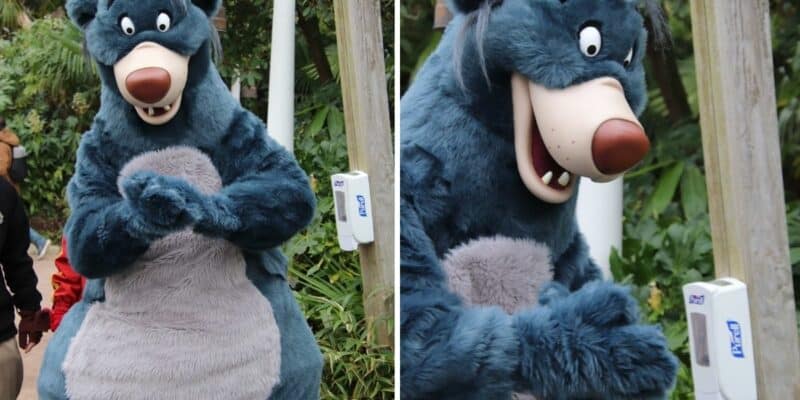 It is no surprise that operating all of the Disney Parks, like any other business during the pandemic, has been a challenge. No Disney Park has returned to their pre-pandemic state as of yet, with many still having shows that are missing, hours reduced, and more. One thing that is on the forefront of Disney’s mind is finding ways to ensure that Guests and Cast Members are safe at all times.

There are rules and regulations put in place at every Disney Park that may differ from one to the other. Walt Disney World Resort, for example, currently has a mask mandate for all Guests while indoors. One thing all Disney Parks share in common is that there are a ton of hand sanitizers all around the Parks. This makes it easy for Guests always to ensure they are being as safe as possible, while constantly being reminded to wash their hands whenever possible.

In the past, we had seen characters tell Guests to put their masks back on when they saw a Guest not following the proper protocol, and now, it seems characters are continuing to encourage safe behavior. At Disneyland Paris Resort, Baloo from The Jungle Book (1967) was seen demonstrating to Guests on how they can use the Purell machines! Of course, he likely did not actually put the sanitizer on his fur, but the gesture is a great form of leadership to Guests, as well as a reminder.

DLP Report (@DLPReport) posted a succession of photos of Baloo getting his sanitizer on!

Below is the current mask policy at Disneyland Paris Resort:

Wearing a mask for children: from 6 years old!

The wearing of an appropriate face covering remains mandatory for all our guests ages 6 and over. Guests will be required to wear a face covering at all times of the day in all areas of the resort (Disney Parks, Disney Hotels, Disney Village and Golf Disneyland). They will be able to temporarily remove their face coverings during meals and to take a picture, at the outdoor Selfie with our characters.
All Cast Members and outside contractors will continue to wear a compliant face covering in all indoor and outdoor areas of the destination.

What do you think of Baloo? Let us know in the comments below!