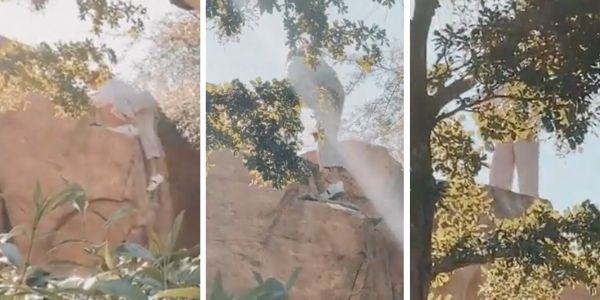 It seems that these days, more and more theme park goers are doing extreme stunts for their social media platforms, some of which are not permitted at the theme parks. For example, we have seen a Guest jump out of a moving boat at Living With the Land to “steal a cucumber” as well as other Guests go viral for “inappropriate attire”.

Well, it seems that despite these “stunts” not being allowed inside the Parks, it is not stopping others from trying to get away with it. Just this afternoon, another Guest was performing a stunt at what looks to be Universal’s Islands of Adventure.

Again, we want to be very clear that these behaviors are not permitted in the Parks and Guests may be removed from the property.

It all started when Patrick Dougall Tweeted a video of a Guest climbing on a rock structure this afternoon, saying:

THIS IS WHY WE CAN’T HAVE NICE THINGS!

STOP CLIMBING ON THINGS! YOU ARE AT A THEME PARK!!!

THIS IS WHY WE CAN’T HAVE NICE THINGS!

STOP CLIMBING ON THINGS! YOU ARE AT A THEME PARK!!! pic.twitter.com/N7ntV8AqVP

Which is bringing in a ton of comments from other theme park goers, expressing their anger at how many are trying too hard to become “TikTok famous”.

“gOt TO bE tiK tOK FAmOuS!”

"gOt TO bE tiK tOK FAmOuS!"

Another Twitter user asked where this was, to which Michael the Gray Tweeted that it looks like Islands of Adventure at Universal Orlando:

Related: Guest Shares Footage of Fight Breaking Out at Universal

Again, we want to be very clear that this kind of behavior is not allowed at the theme parks as it is dangerous to the Guest, as well as those surrounding them.

Comments Off on VIDEO: Guest Caught Climbing on Structure at Theme Park