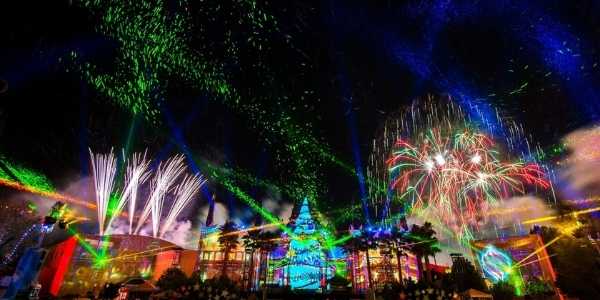 The holidays have arrived! We’re excited this 2021 winter season is filled with the return of fan-favorite entertainment and holiday festivities. Over at Disney’s Hollywood Studios at Walt Disney World Resort, we’re gearing up for the return of Indiana Jones Epic Stunt Spectacular! in December 2021, enjoying Minnie’s Holiday Dine, and simply can’t get enough of the stunning Sunset Seasons Greetings. We’re even preparing for the return of Fantasmic! in 2022. With no fireworks currently available at Disney’s Hollywood Studios, we had our fingers crossed that the usual holiday nighttime spectacular would once again light up the sky above the Disney Park. Sorry Disney fans, it looks like we’ll be kept waiting for now.

Since Star Wars: A Galactic Spectacular has yet to return, we were hoping Jingle Bell, Jingle BAM! would bring back some nighttime excitement to the Disney Park this holiday season. Disney has listed the holiday plans for Disney’s Hollywood Studios including:

In the screenshot above, you’ll see Jingle Bell, Jingle BAM! was noted in 2020 to return in 2021. This is reportedly not the case. @ScottGustin took to Twitter to report, “according to WDW, “…Jingle BAM is not part of our holiday entertainment lineup this year…”

Feel the warmth of holiday magic as Disney’s Hollywood Studios transforms and surrounds you in unforgettable Disney moments. Experience the joy, excitement and music of the season as Jingle Bell, Jingle BAM! raises holiday spirit to awe-inspiring new heights! Watch in wonder as buildings and rooftops come to life—and be immersed in beloved scenes from Mickey’s Christmas Carol, Beauty and the Beast, Pluto’s Christmas Tree, Tim Burton’s The Nightmare Before Christmas and more. Featuring traditional holiday tunes and stories brought to you by Mickey, Minnie, Olaf and friends, state-of-the-art projections from Disney animation classics, amazing laser effects, fireworks and even a little “snow,” this spectacular evening celebration builds to a festive finale that must be seen—and heard—to be believed!

The note, “Please check back later for 2021 dates and information” still remains on the webpage for now. Looking to experience fireworks? Head on over to Magic Kingdom for “Disney Enchantment” or EPCOT for “Harmonious.”

Why do you suppose Disney has yet to return fireworks at Disney’s Hollywood Studios? Let us know in the comments!