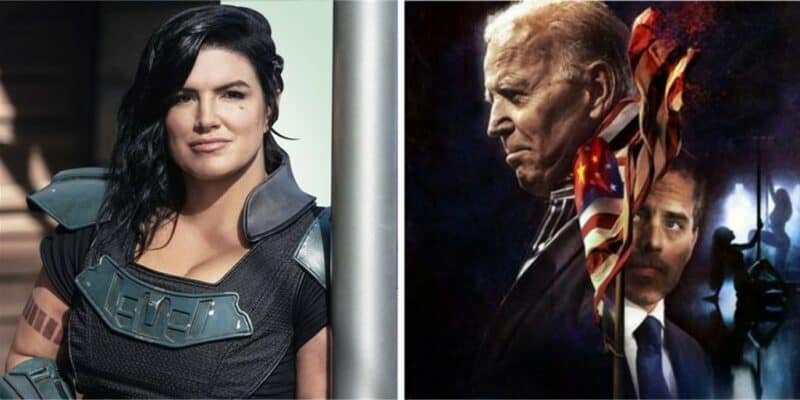 Gina Carano, former The Mandalorian Cara Dune character, is hitting media headlines once again. After several controversial social media post leading to her firing from Disney and Lucasfilm, hashtags like #FireGinaCarano, #WeLoveCaraDune, and #IStandWithGinaCarano were trending on social media with supporters and non-supporters of the actress. Now, Carano finds herself in a new role as a star in the controversial Hunter Biden film.

Gina Carano has announced she is joining the cast of the Robert Davi-directed My Son Hunter movie which follows U.S. President Joe Biden’s youngest son, Hunter Biden’s scandalous business dealings and party lifestyle. The film is said to reveal how Biden’s youngest son acquired tens of millions of dollars from foreign entities.

The movie is currently in production in Serbia with the former Mandalorian star Gina Carano as a secret service agent. British actor Laurence Fox has been cast to play Hunter Biden, with John James as President Joe Biden.

The Ann and Phelim Scoop took to YouTube to share the news that Carano will star in “My Son Hunter” The Hunter Biden Movie:

Gina Carano (“The Mandalorian,” “Haywire,” “Deadpool”) is joining the Hunter Biden biopic “My Son Hunter,” producers have announced. The biopic details the scandalous business dealings and lifestyle of Hunter Biden and the corruption that may lead all the way to the White House.

Here’s the video below with Carano sharing the news of her involvement in the film:

RELATED: Is Gina Carano Coming Back to ‘Star Wars’?

Even though MySonHunter is currently filming, the movie is still raising funds to make the film possible with 66% of its $2,500,000 goal raised sharing:

“Help stop the media coverup! The media, big tech, and the establishment worked overtime to cover up the truth about the Biden Family Corruption. In “My Son Hunter,” we tell the story of the Biden Family Corruption through the eyes of Hunter Biden. You will be shocked by what you see on screen. You may think you know the story, but the truth is more damning than you could ever imagine! Hollywood won’t fund this movie, which is why we’re counting on YOU!”

Details about the film have been revealed in the video below:

Details of when My Son Hunter will complete filming and a time frame of when we can expect to see the upcoming film released have yet to be revealed.

Will you be watching Gina Carano star in My Son Hunter? Let us know in the comments.