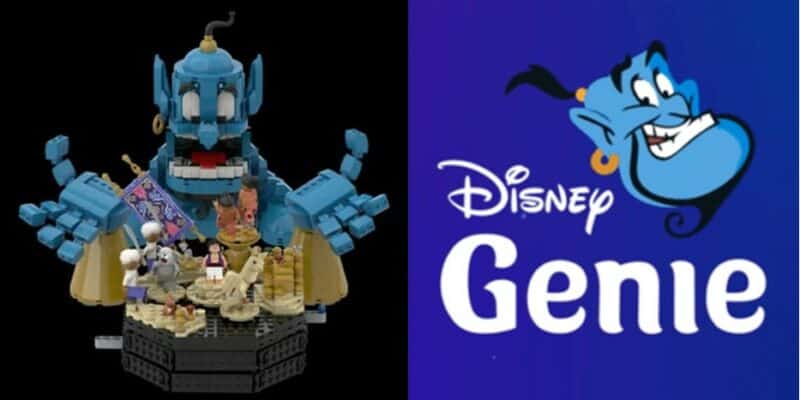 Did you know if you have an excellent imagination and are great with LEGO bricks, you could become the next master designer of your very own LEGO set? Yes! “LEGO Ideas” is a place where hard-core LEGO fans go in an attempt to become the next master builder. Master builders in training submit their creative idea, showcase their proposals, and wait for fans like us to vote for their dream models to become reality. One of these LEGO ideas that is gaining speed includes a massive Genie LEGO which is getting closer and closer to becoming the next real LEGO set.

The Disney Genie hasn’t had the greatest reputation as of recently. Walt Disney World Resort launched Disney Genie (a complimentary upgrade to the My Disney Experience App), Disney Genie+ (a paid FastPass system), and Lightning Lanes (pay to ride select attractions a-la-carte). Genie’s name has not been used in the greatest way among Disney fans, so maybe a new LEGO set will remind us of his lovable, yet “phenomenal cosmic powers!”

One imaginative LEGO builder has created the “Aladdin: Friend Like Me (30th Anniversary Special)” LEGO set which was first introduced in July 2021. Now, in November 2021, this 1580 LEGO piece set has 6,597 supporters and counting. The builder goes on to describe the project: “Here we see Genie in a ginormous buildable figure, trying to emulate his magnificence, “conjuring” the final scene of the music clip where he creates a Broadway-level stage with dancing Elephants, Camels, Lady dancers and Sword dancers on a mountain of treasures. In the center of this incredible scene is our protagonist, Aladdin.”

RELATED: Tower of Terror Gets a LEGO Makeover

“This set is composed by a Genie buildable figure, his detached hands and a center “stage” where are Aladdin and other characters. The upper part of this center stage can rotate and doing so some sub circles will turn in different orientation and speed, emulating a dance. The Genie figure can open and close his mouth when you move its handle on the back of Genie’s head. Genie’s hands is fully articulated to make it able to produce any moves and to help on it there’s a support that can hold the hand by its fingertips or wrist as part of the setup.”

RELATED: Entire Disney World Resort, Including ‘Happily Ever After’, Built From LEGOs

“Kids can play with it, recreating this iconic scene from the movie or creating his own scene as they love it. The Genie’s figure working as a Puppet can produce great playtime.”

Disney’s animated classic, Aladdin, was released on November 25, 1992. If this LEGO set gets enough votes, it could be ready in time for Aladdin’s 30th Anniversary in 2022. With 6,597 current supporters, it needs over 10,000 to go into the “Expert Review” round.

Want to see this LEGO idea become a true LEGO set? You can vote for it here!