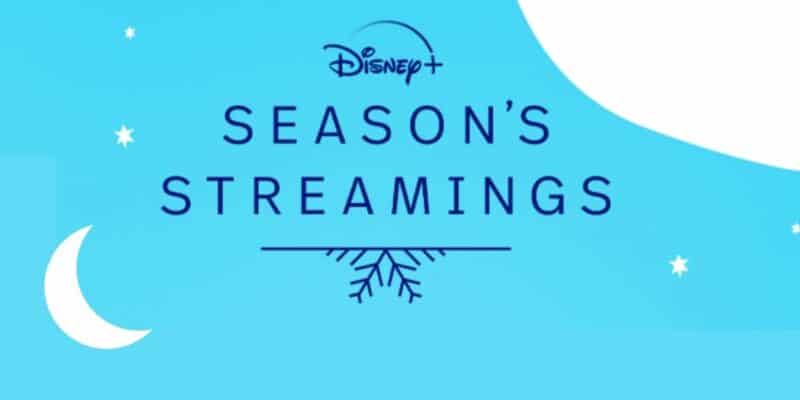 Straight from Disney+, the season is merrier than ever! This Season’s Streamings include Disney+ originals, winter and snowy favorites, Christmas movies on Disney+, and merry episodes of your favorite television shows. Happy Holidays from Disney+!

Christmas Movies on Disney+ and More…

“All of your holiday streams will come true with Disney+’s second-annual Season’s Streamings celebration!” reads a Disney press release. Our favorite streaming service, Disney+, is bringing holiday cheer with new originals and classic holiday episodes for Disney fans to enjoy.

Today, November 16, 2021, kicks off a feast of holiday-themed episodes, shorts, movies, and specials as a part of the new Holiday Collection. You’ll find the graphic below when you enter the “Search” portion of the Disney+ dashboard!

To celebrate the debut of the Holidays Collection of Christmas movies on Disney+, Disney created a short clip to get you in the mood to screen your favorite holiday flicks!

Curious as to the entire lineup of the Holiday Collection of Christmas movies on Disney+?  There are so many offerings you’ll be busy until you take your holiday decorations down!

But wait, there’s more! Disney+  subscribers and their friends and family “can celebrate the holidays at home with new and classic content including Noelle, Home Sweet Home Alone, Soul, Frozen, Home Alone, The Nightmare Before Christmas, The Santa Clause, and many more.  In honor of its 25th Anniversary, fans can also watch the holiday classic Jingle All The Way, streaming now.

Marvel Studios’ Hawkeye will launch on Wednesday, November 24 with a two-episode premiere. The Disney+ original series is set in post-blip New York City where former Avenger Clint Barton aka Hawkeye (Jeremy Renner) has a seemingly simple mission: get back to his family for Christmas. But when a threat from his past shows up, Hawkeye reluctantly teams up with Kate Bishop (Hailee Steinfeld), a 22-year-old skilled archer and his biggest fan, to unravel a criminal conspiracy. Episodes are helmed by Rhys Thomas, who’s also an executive producer, and directing duo Bert & Bertie.

The Book of Boba Fett, a thrilling Star Wars adventure teased in a surprise end-credit sequence following the Season 2 finale of The Mandalorian, finds legendary bounty hunter Boba Fett and mercenary Fennec Shand navigating the galaxy’s underworld when they return to the sands of Tatooine to stake their claim on the territory once ruled by Jabba the Hutt and his crime syndicate. The highly anticipated new series from Lucasfilm will debut Wednesday, December 29 on Disney+.

Premiering Wednesday, December 8, the Disney+ original series Welcome To Earth follows Will Smith on an extraordinary adventure around the world to explore Earth’s greatest wonders and reveal its most hidden secrets. Throughout the six-part limited series from National Geographic, Will is guided by elite explorers on an awe-inspiring journey.

Which of these holiday specials and Christmas movies on Disney+ will you be watching this season? Leave us a comment below, and Season’s Streaming to you all!

Comments Off on Every Merry Holiday Movie on Disney+ and More!