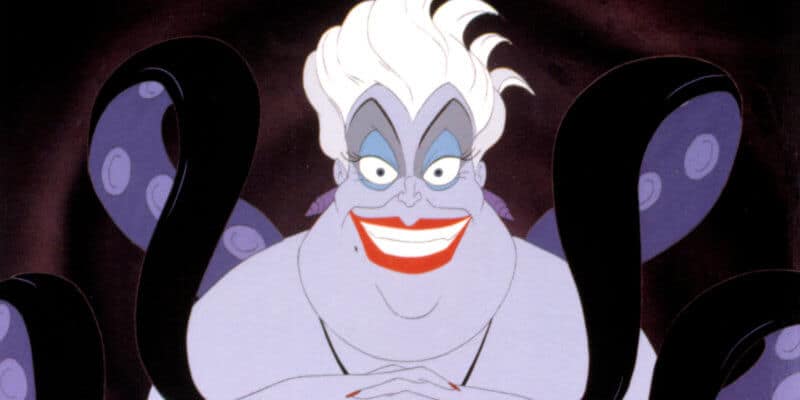 But who really is this Octopus, Squid-looking, furious female? As the years have passed, more looks at this Disney villain have shown us who she really is. Voiced by none other than the devilish Pat Carroll, Ursula’s iconic look was inspired by the famous drag queen, Divine. The drag queen had a signature look of a high hairline, thinly drawn eyebrows, and strikingly bold eyeshadow. It’s easy to see Ursula’s inspiration here in a headshot of Divine.

Ursula also has non-Disney roots in Hans Christian Anderson’s original fairy tale, The Little Mermaid. Here, a sea witch beckons the little fish girl and tempts her with her dreams in a trade for her voice (and tongue). Obviously, the mermaid’s choice is a poor one, leading to her death at the end of the story.

While it has traditionally been accepted that Ursula is half-octopus, it is argued that Ursula is a squid. Featuring only six black and purple tentacles, this would cement her position as a squid, though fans argue that her two human arms create eight limbs. By the same point, you would not count Ariel’s arms towards her fin count, but the argument remains. Do you feel that Ursula is a squid or an octopus?

If you’re looking for the classic animated Ursula, there are only a handful of places to spot our favorite semi-cephalopod. Of course, the original 1989 classic is the definitive Ursula movie, but you can also see her in the Halloween House of Mouse VILLAINS episode (2002), and Queen Latifah’s representation of her in 2019 The Little Mermaid LIVE, which combined the classic Disney animation with live Broadway-style musical numbers.

Speaking of Broadway, if you catch a local or touring version of The Little Mermaid on Broadway, you’ll get both Ursula and a bit of her backstory. Canonized via this “Daddy’s Little Angel” performance as Triton’s sister, Ursula was the seventh little girl of Papa Poseidon, given a magic shell as a placation for her ugliness. Ursula admits to killing her sisters and watching her father pass from a deadly illness. Ursula gained the whole kingdom until her brother Triton came of age and Ursula was banished from the palace.

Lastly, we would be remiss if we didn’t mention the upcoming live-action adaptation of The Little Mermaid (2023). Having already wrapped filming, the live action movie will enchant viewers in 2023 with music from Alan Menken and Lin-Manuel Miranda. The film will star Halle Bailey as Ariel and Melissa McCarthy will voice the revenge-filled Ursula character.

Where You Can See Ursula

The iconic villain, Ursula, has jumped from the silver screen to many other forms, thanks to her popularity with the general public. In an outcry for more Disney characters to be represented in the Disney Resorts, A Little Mermaid wing was constructed as part of the Art of Animation Resort in Orlando, Florida. Central to the wing is a larger-than-life evil Ursula statue, cackling with glee as she faces off with Ariel on the other side, Flotsam and Jetsam behind her.

Of course, items inspired by the Sea Witch pop up all the time on shopDisney.com and inside the Disney Parks. This specialty chocolate dessert, topped with Ursula’s magic shell, was featured at a Halloween time party. Chocolate tentacles (notice there are only 6!) cap off the look for a distinct treat.

Some lucky Disney Guests have been able to spot a slithering Ursula in parades at Disneyland Resort. In past years, a floating Ursula carried a glowing scroll ahead of the Villain’s float down Main Street, U.S.A., and was greatly welcomed by visitors.

Like the aforementioned parade, Ursula has also been present in a few attractions at the Disney Parks. Featured in the stage show at MGM Studios (now Disney’s Hollywood Studios), The Voyage of the Little Mermaid stage show has greeted guests for years and features a nearly two-story-tall villain to entertain the whole family. Too lifelike? You can also see Ursula singing and whipping up spells in Disney dark rides; The Journey of the Little Mermaid at Magic Kingdom and Disney California Adventure (The Little Mermaid ~ Ariel’s Undersea Adventure).

Unfortunately, not many villains get meet and greets nowadays. Outside of Gaston at Magic Kingdom or a few assorted villains at Halloween Parties, they aren’t easy to see. Ursula is so large and cumbersome, you’ll most likely only see her on stage shows or in the parade. You can, however, see Ariel as a mermaid in her Grotto at Walt Disney World Resort, and Ariel with her human legs in a gown at various places across the Disney Parks.

Would you love to meet Ursula at the Disney Parks? Why is she your favorite villain? Leave us a comment below!

Comments Off on Disney Villains: Ursula