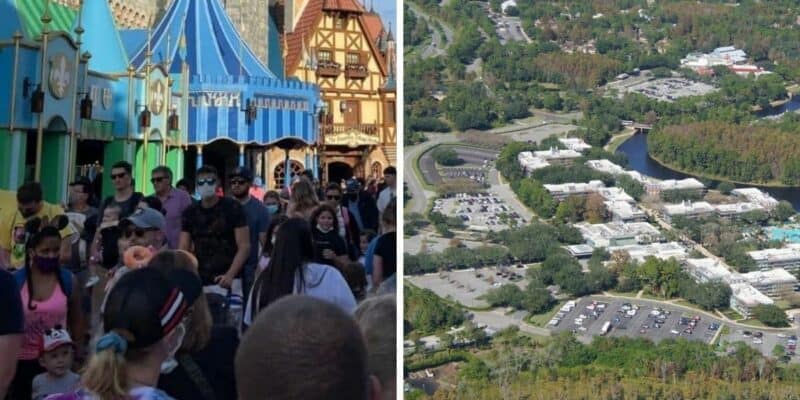 We have been reporting on the current crowd levels at Walt Disney World for the holiday weekend. Well, despite the recent crowds pouring into the Parks, it seems the parking lots themselves are not overly packed.

Related: Disney World Parking Lots Are A Ghost Town, Even When at Capacity

Many families are visiting Walt Disney World and its four theme parks — Magic Kingdom, EPCOT, Disney’s Hollywood Studios, and Disney’s Animal Kingdom — this week due to the holiday. Though, despite the crowds we have been reporting on inside the theme parks, it seems one Disney World Resort parking lot remains decently empty.

Bioreconstruct took to Twitter to share an aerial view of the parking lot at Disney’s Port Orleans Resort, which recently reopened to Guests, along with the caption:

Port Orleans Resort reopened recently. Had been closed due to pandemic. Many guest cars in the parking lots. Aerial photo on Thanksgiving Day.

Port Orleans Resort reopened recently. Had been closed due to pandemic. Many guest cars in the parking lots. Aerial photo on Thanksgiving Day. pic.twitter.com/3coZKLdr9j

Though Bioreconstruct stated that many cars can be seen in the parking lots, you can also see just how much of the parking lots are not being occupied by vehicles despite the Resort itself reopening to Guests and having sparse room availability during the holiday season.

This, of course, could be because many Guests flew into Orlando and are utilizing Disney World transportation to get to the Parks, including buses, rather than renting a car and driving themselves; however, with the recent crowds we have seen, seeing this Disney Resort’s parking lot remain pretty empty is a bit shocking.

Have you visited Walt Disney World recently? Have you noticed the crowds increase? Let us know in the comments below.

If you want to visit Walt Disney World on your next family vacation to visit the four theme parks — Magic Kingdom, EPCOT, Disney’s Hollywood Studios, and Disney’s Animal Kingdom — but aren’t sure where to begin planning then don’t hesitate to contact our friends over at Academy Travel. They will be with you every step of the way! Get your free quote today.