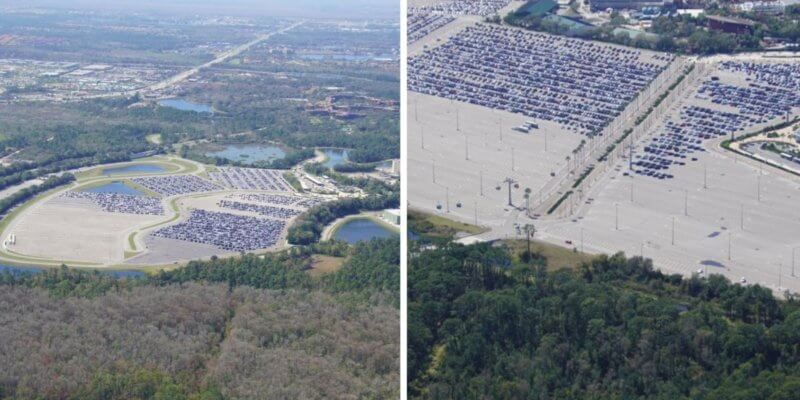 Now that it has been months since Disney World has been operating during the pandemic, the way that the theme parks operate has started to become what Guests expect as the new “normal”. Capacity is currently set at 35%, and when the theme parks hit that capacity, that has become the new crowded.

Before the pandemic, when Magic Kingdom, EPCOT, Disney’s Hollywood Studios, and Animal Kingdom experienced a crowded park day, Guests were often running into each other at every turn. Personally, I remember walking through the Fantasyland passageway and being shoulder to shoulder with Guests during the Florida summer heat. Now, it seems when there is a cluster of people, that is the new crowded.

Most recently, Bioreconstruct (@bioreconstruct) took to Twitter to share some aerial photos of some of Disney World’s theme park parking lots when the parks were at capacity.

Disney’s Hollywood Studios is arguably one of the most popular Disney World theme parks at the moment. With Star Wars: Galaxy’s Edge, every Star Wars fan can live their dream and enter the Lucasfilm universe by stepping foot on Batuu. Toy Story Land is home to Slinky Dog Dash and allows for Guests to shrink down to toy size as they explore. Even though Disney’s Park Pass reservations were sold out for Hollywood Studios, the parking lot looked like a ghost town!

Animal Kingdom is typically an easier Disney Park Pass reservation to get, even though it has epic attractions such as Avatar Flight of Passage in Pandora, and Expedition Everest! That being said, Animal Kingdom was also at capacity and had a similar-looking parking lot situation.

As you can see in both photos, the parking lot which is holding the cars of all Cast Members and Guests at both parks are quite empty. On a typical pre-pandemic Disney park day, these parking lots would fill a lot quicker!

Taking a look at these photos gives Guests a reassuring outlook that the parks are indeed at a reduced capacity. That being said, of course, all of these cars are not representative of everyone in the parks. Many Guests may choose to Uber, or, if you are staying at a Disney World Resort, Disney buses and the Disney Skyliner would have aided in transporting Guests to and from both of these theme parks.

With Disney Park Passes also extending into 2023, Guests who plan to visit Disney World during the 50th anniversary can find comfort that while the parks are at a reduced capacity, crowd levels, even at their highest, will still be on the lower side.

Do you feel that the parks are still crowded at Disney World?

If you want to book a trip to Orlando and experience sunny Central Florida, why not take a visit to the Walt Disney World Resort? With Mickey Mouse and Minnie Mouse awaiting your arrival and the 50th anniversary celebrations around the corner, the parks are getting even more magical! Click here to get started today, and you will be on your way to Cinderella Castle!