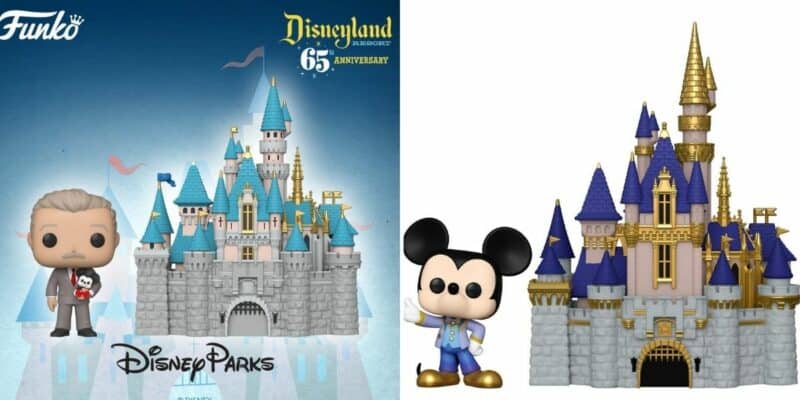 When Guests think of any Disney Park, there are a few things that instantly come to mind. Mickey Mouse is a significant character that can be found in every Disney Park around the globe; aside from him, the castle is always an essential aspect.

Although not every Park has a castle, every Disney Resort does feature a Park which has one. Across all of the parks, from Cinderella Castle to Sleeping Beauty Castle and so many more, each castle is distinctly unique and different, as well as ever-changing. For example, Disneyland Paris is currently refurbishing their version of Sleeping Beauty Castle!

At Walt Disney World, we recently saw Cinderella Castle receive a new paint job with a brighter pink and royal blue colors, adding a new vibrance to the previous pastel-looking color scheme. Now that we are celebrating the 50th anniversary, that makeover was amplified with new decor and golden accents for 18 months, beginning on October 1.

Below, you can see Funko’s (@OringinalFunko) Twitter reveal of the 50th anniversary collection, and if we look at the castle, we can see that although the colors are correct, the shape is that of Disneyland’s castle mold.

Below is a photo of the Funko released of Disneyland’s castle for the 65th anniversary:

Fans quickly noticed that the mold was reused, even though the castles have their own unique shape, and were not happy.

Rob Cadena (@Rob_Cadena) noticed and also shared a photo of each castle in real life, which shows they are very different in size and shape.

That is clearly Sleeping Beauty Castle from Disneyland, not Cinderella Castle from Magic Kingdom. Nice try though.

That is clearly Sleeping Beauty Castle from Disneyland, not Cinderella Castle from Magic Kingdom.

That is the wrong castle for Walt Disney world.

That is the wrong castle for Walt Disney world. pic.twitter.com/f0bKRUIlbI

Phillip (@p_paree) noticed some key elements were missing from the design:

Where’s the clock? This looks like Sleeping Beauty Castle, not Cinderella Castle…

Where’s the clock? This looks like Sleeping Beauty Castle, not Cinderella Castle…

Below, looking at the photos side by side, we can see the mold is the same, although the colors have changed.

Re-using molds is something that Funko has been heavily criticized for in the past, so it is not too surprising to see it happen once again. However, Disney fans are not pleased with the lack of detail that went into the castle mold for the 50th anniversary collection.

If you want to pre-order the collection, you can here!

What do you think of this duplicate castle mold?