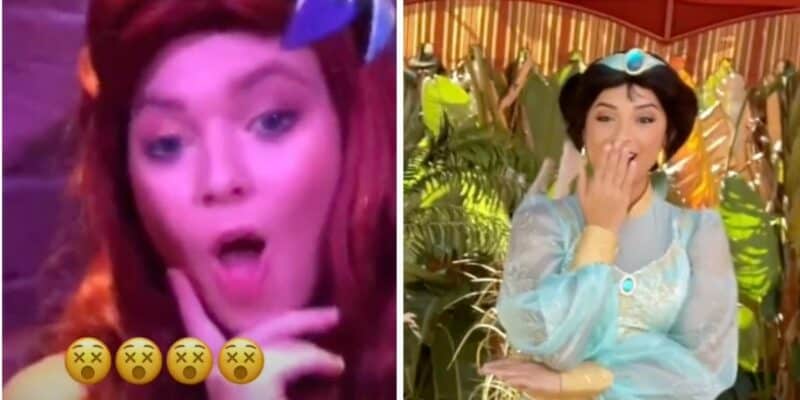 How you doin’? This Disney Guest delivers dad joke-style pickup lines to Disney Princesses with magical results. At Walt Disney World Resort, you can meet and wave to nearly all the official Disney Princesses in Disney’s lineup, but do you sometimes find yourself tongue-tied?

Take a tip from this Disney Guest and put some style into your conversation!

“Livin’ the Dream” in Orlando, Disney World enthusiast JoJo Crichton loves to visit the Parks and interact with characters. From Villains to Heroes to Disney Princesses, JoJo has some great character meet and greets, even while staying socially distanced.

But he’s been getting some attention lately for his extremely corny, yet creative pickup lines directed at the Disney Princesses. A self-proclaimed “terrible at flirting” guy, JoJo has some zingers lined up for our favorite Disney heroines.

First up, JoJo meets with Princess Jasmine, under a lovely tassel-lined tent. Telling Jasmine he’d like to “show her the world,” which Jasmine loves, he tells her, “But you already own a mirror……..” This causes Jasmine to blush and accept the tender sentiment blended with the ultimate dad joke.

Back at the Grotto, Ariel and Prince Charming JoJo met once upon a time. This flipping fish was a bit hesitant to hear JoJo’s wisecracks, but his epic pickup line caught her unawares, and we’re pretty sure she loved it. After asking where Prince Eric was, JoJo suggested he and Ariel “were mer-MADE for each other” and both show a few funny smiles after the delivery. Sadly, Ariel reminds her Guest that she and Prince Eric were really mer-MADE for each other, leaving JoJo out to sea.

Tiana was not immune to the clever pickup lines delivered by JoJo. In a meeting at Princess Fairytale Hall, JoJo remembers telling our leafy green Princess he found her… “ribbeting,” causing Tiana to delve into laughter and even got some laughs from Rapunzel just a few steps away.

While JoJo had some epic success with these elegant ladies, Agatha didn’t quite fall for his romantic trickery. Visiting the Avengers Campus at Disneyland Resort, JoJo donned a “Eugene” Flynn Rider costume for the after-hours Oogie Boogie Bash Halloween event. Displaying his smolder on full view, (a few times, actually) Agatha rated him a negative out of ten. Trying again with a little more effort, JoJo received an even lesser negative 2. Looks like he doesn’t have much sway with the evil gals. Perhaps Zombie Captain America would love a look!

What are some of your favorite character interactions? Have you ever told a Disney character bad dad jokes or delivered silly Disney pick-up lines? Leave us a comment below!