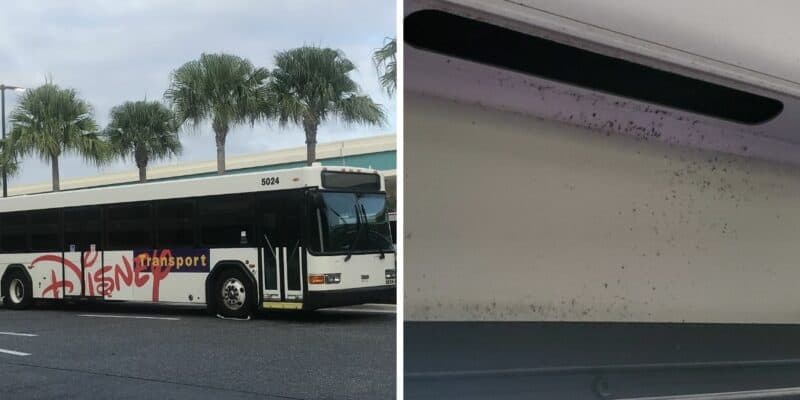 One Disney Guest noticed signs of mold or mildew growing inside some of the Walt Disney World buses on a recent vacation.

A Walt Disney World Guest and Reddit user, who goes by jivey15, shared a photo from inside one of the Disney World buses on a recent vacation, writing:

I’ve noticed that the busses are showing signs of mildew or mold.

I’ve noticed that the busses are showing signs of mildew or mold. from WaltDisneyWorld

The Disney World Guest and Reddit user did say that they reported this to the bus driver and a supervisor at the theme park once they were able to. They also Tweeted out this photo showing the signs of mold or mildew to Disney Parks’ Twitter account; however, this is the second bus that the Guest noticed this on. They note:

Yeah. I’ve told the bus driver, tweeted at the parks and told a supervisor at the park drop offs each time I’ve seen it. This is just two of the 6 busses so far that I’ve seen this on.

With Walt Disney World being in Florida, it is typically a very humid environment and so mold or mildew growth isn’t too unusual, but now that Disney has been informed, they will more than likely work hard to try to fix this issue for safety and health reasons.

As always, if you ever see something unusual, please notify the nearest Cast Member. They are there to help in any way they can and to ensure you have a magical time at Walt Disney World.

Have you ever noticed anything like this on Walt Disney World property? Let us know in the comments below.