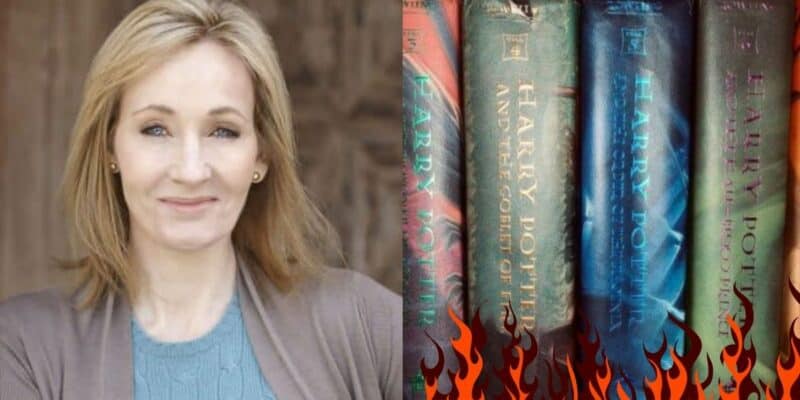 J.K. Rowling’s rise to fame after writing the Harry Potter series is a Cinderella story that has inspired countless writers to achieve their dreams. She wrote most of the seven books of Harry Potter at The Elephant House in Edinburgh and it has become a landmark for Harry Potter fans ever since.

However, tragedy struck last month when the café was damaged by a fire that was believed to have been started in Patisserie Valerie cafe next door, which has a basement underneath The Elephant House cafe.  So, fans mourned the loss of the birthplace of Harry Potter.

But there is some good news to be had in the story. While café owner Mr. Taylor told BBC Scotland it will be about a year before he can reopen, he was overjoyed to discover the table where Rowling sat has been recovered:

“Thankfully I’ve found JK Rowling’s table among the rubble and although it is water and smoke damaged it was in the back room so it can be saved.”

J.K. Rowling remembers visiting The Elephant House fondly. She went on the BBC podcast The Poet Laureate Has Gone to His Shed and said:

“That was a lovely space with a really great view of the castle […] I met the owner years later and he said, ‘You never come in anymore.’ In a dream world I would still go in there, but it is just not humanly possible to go in there anymore and write […] I had to stop writing in cafes. I really loved it, but I just couldn’t anymore.”

Related: A Butterbeer Blizzard at Dairy Queen? How You Can Order One!

J.K. Rowling is still actively working on new Harry Potter projects including the upcoming film Fantastic Beasts: The Secrets of Dumbledore (April 15, 2022) which just released a synopsis describing it as

Several years after the events of The Crimes of Grindelwald, the story takes place partly in Rio de Janeiro, Brazil, and partly in Berlin, Germany and leads up to the Wizarding World’s involvement in World War II. With Grindelwald’s power rapidly growing, Albus Dumbledore entrusts Newt Scamander and his friends on a mission that will lead to a clash with Grindelwald’s army, and will lead Dumbledore to ponder how long he will stay on the sidelines in the approaching war.

The synopsis has sparked controversy as J.K. Rowling has come under fire for transphobic and antisemitic comments in the past. Fans are concerned that as long the Harry Potter creator is involved that the World War II setting will not be handled with care. As Harry Potter ages and fans revisit the Wizarding World, they have realized hidden antisemitic symbolism in creatures like the goblins that run the wizard bank Gringotts.

In the next film, Mads Mikkelsen will replace Johnny Depp (Pirates of the Caribbean) as Gellert Grindelwald. Johnny Depp was fired during the legal dispute with his ex-wife Amber Heard. This third installment in the Fantastic Beasts universe is the sequel to Fantastic Beasts: The Crimes of Grindelwald (2018). It will star Eddie Redmayne, Katherine Waterston, Ezra Miller, Callum Turner, William Nadylam, Poppy Corby-Tuech, Jessica Williams, Jude Law, Dan Fogler, Alison Sudol, and, as noted, Mads Mikkelsen.

Let us know in the comments if you are glad the table was spared from the flames.