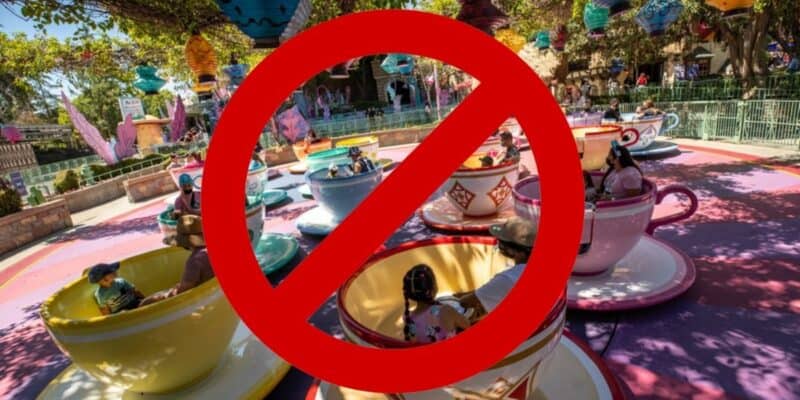 Southern California is a hot, dry, desert environment, which means that the weather is usually sunny with very little chance of rain. However, sometimes the weather gods decide to change things up in a big way. Such a change happened at Disneyland on October 4 and Guests visiting the Happiest Place on Earth were given quite the experience.

Most of the day, the weather was its typical, Southern California warm and dry. However, that night, things took a massive change and the skies opened up. Rain began to fall in droves and then turned into some intense hail. Guests shared some videos of the crazy weather they found themselves stuck in on social media.

Will the Thrill (@Riiooss_9) shared a video of the hail crashing to the ground at the Parks and noted the severe weather change.

It was just 85 degrees this afternoon …. Disneyland going crazy rn

Maxwell Glick (@maxwellglick) shared some incredible videos of the torrential rain, as well as flooding in Frontierland. Rain is so uncommon in Southern California that when it pours, the water drainage system can become overwhelmed.

There is a HAIL STORM at Disneyland right now!!!!! (Filmed by my friend who doesn’t have twitter)

Guests checking the Disneyland mobile app a couple of hours before the Parks closed saw a number of rides listed as “temporarily closed”.

Anaheim, California — where Disneyland Resort is located — was not the only Southern California area to see some intense weather. Severe rain, thunder, and lightning was seen more than 40 miles away where power outages were coming and going.

Disneyland Resort did see some lightning a few weeks ago during the opening night of Oogie Boogie Bash, but there was no rain that accompanied the lightning, which was most likely caused by the heat.

At the time of publication, Grizzly River Run, Incredicoaster, Jungle Cruise, and Luigi’s Honkin’ Halloween remain closed. The weather is supposed to remain dry and sunny, so if you are visiting Disneyland or Disney California Adventure and would like to try to ride those attractions, be sure to frequently check the Disneyland mobile app to see if they have reopened.

Were you at Disneyland when the hail was falling? Let us know in the comments!