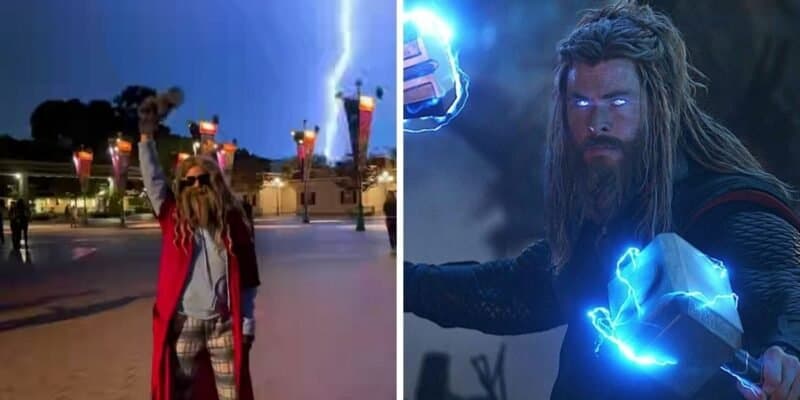 On September 9, Oogie Boogie Bash kicked off at Disneyland Resort — Guests dressed in incredible Halloween costumes, candy was flowing, and the villains were out in full force. As if all of those elements aren’t exciting enough, Guests received an extra spooky surprise that night in the form of some super intense lightning.

Anaheim is located in Southern California, which is largely a desert climate, therefore the area can go months without seeing any substantial rainfall. Thunder and lighting can see even more rare than rain, so when the lightning started to light up the area, Guests were in shock and awe and took some incredible photos and video.

Instagrammer Maxwell G. (@mrcheezypop) shared a video of the lightning coming down over the Carthay Circle Restaurant.

At Oogie Boogie Bash, Guests of all ages are encouraged to go all out and wear Halloween costumes of all types. Some Guests go all out and fully embrace the character that they have decided to portray. That was definitely the case with a woman who went to Oogie Boogie Bash dressed as what is lovingly referred to as “Fat Thor” from Avengers: Endgame.

Kelly W. took the lightning opportunity to bring her Thor costume up a level. Complete with Mjolnir — Thor’s infamous hammer — Kelly stood out on the esplanade — the area between Disneyland Park and Disney California Adventure Park — and swung Mjolnir in the air as the lightning struck behind her.

Her sister-in-law Debbie (@debbiewilsonn) shared the amazing video and the fact that, at first, neither woman realized it was real lightning.

When there is lightning at Disneyland, and your sister is dressed as Thor! Shoutout to my sister @wilson__k who really came through with her costume yesterday. We actually thought the flashing lights were part of the party, until we exited the park, and realized it was lighting.

Oogie Boogie Bash began in 2019 as a replacement for Mickey’s Halloween Party and was an immediate hit. While the party was canceled last year due to the pandemic, it is now back in full force and with more villains than ever.

Oogie Boogie Bash will run select nights throughout Halloween Time at Disneyland Resort, with the last party happening on October 31.

Were you at the opening night of Oogie Boogie Bash? Did you see the lightning? Let us know in the comments!

CLICK HERE to book your frightfully fun Disneyland Resort vacation with our friends at Academy Travel – an EarMarked Diamond travel agency that can provide you with a free quote today!