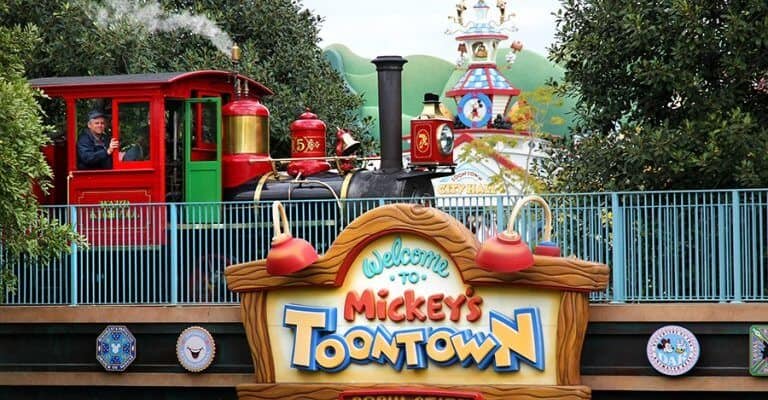 Welcome to Mickey’s Toontown, where you can explore the world of Mickey Mouse, play with your friends Goofy and Donald, and have loads of fun! Toontown can be enjoyed by Disney fans of all ages, but if you are planning to visit Disneyland Resort with your little ones, then you won’t want to skip a trip to Toontown.

Enter the world of cartoon fun in Mickey’s Toontown. Here, Guests can meet Mickey, spin in a cartoon car, and play in Chip ‘n Dale’s treehouse until the sun goes down (remember, ToonTown closes earlier than the rest of the Park!).

From Disneyland  – Memories of a Lifetime:

Toontown legend has it that Mickey Mouse found the three-acre community in the 1930s as a retreat from the bustle of Hollywood. Until its opening in 1993 Toontown was kept secret, the only human allowed being Walt Disney. Mickey suggested in the early 1950s that the vacant property to the south be turned into Disneyland Park. Thirty-eight years later, Mickey decided to open Toontown to the public.

Signage leading into Mickey’s Toontown denotes such organizations as the DAR (Daughters of the Animated Reel), Loyal Knights of the Inkwell, Optimist Intoonational, and the Benevolent and Protective Order of Mouse.

Where to Find Mickey’s Toontown at Disneyland

Mickey’s Toontown is located toward the back of Disneyland Park. There are only a couple of ways to get to Toontown.

One of the ways to get to Toontown is by walking through Fantasyland past “it’s a small world.” From there, you will see the entrance to Mickey’s ToonTown.

The other way to get to Toontown is by riding on the Disneyland Railroad. The Disneyland Railroad makes several stops at stations throughout the theme park, one of those stations being at Toontown. So, you could board the train at the Main Street, U.S.A., station, and then ride it all the way to the Toontown station.

Within Toontown, there are several popular locations. Soon after you enter this area of the Park, and you look toward the left, you will see Mickey’s house and Minnie’s house. This is also where you can meet these characters — but more on that later on in this guide!

There are a variety of attractions in Mickey’s Toontown for the whole family (especially the little ones!) to enjoy.

In Mickey’s Toontown, you can visit the following locations:

Currently, there are two rides in Toontown: Gadget’s Go Coaster and Roger Rabbit’s Car Toon Spin. Below, you can read more about these two attractions:

Go Nuts!
Climb aboard a train made of acorns and get ready for a wild ride! Race around the winding track Gadget Hackwrench crafted using oversized “found objects.” Enjoy panoramic views of Mickey’s Toontown on a whirlwind trip around Toon Lake.

Be on the lookout for a happy green frog who likes to spit a stream of water directly over your head!

How Many Can Sit Together?
Each hollowed-out “acorn” seat fits 2 passengers and is designed for 1 adult and 1 child.

Play Before You Ride
Explore a colorful collection of found objects inside Gadget’s Workshop, where she designs all kinds of marvelous contraptions—including her mouse-terpiece: a roller coaster made from acorns.

Based on the Animated Series
Gadget’s Go Coaster is inspired by the Disney animated series Chip ‘n Dale Rescue Rangers, where Chip, Dale and a team of crime fighters help solve mysteries.

The cleverest member of the team is Gadget, a young female mouse and a resourceful inventor who uses found objects like bottle caps, cans, toy blocks and rubber bands—all seen from her mouse-size point of view.

A “Hare”-Raising Ride
Catch a ride in a taxi and follow Roger Rabbit and Benny the Cab as they race through Toontown in search of Jessica Rabbit. Beware—the villainous Weasels are pouring slippery Toon-melting Dip in the paths of passing vehicles—including yours!

Crash and dash into Bullina’s China Shop and slip and slide through the Power House. Spin wildly into the Gag Warehouse storage area, where the Weasels are waiting to take aim at your cab.
Is this the end of the line for you and Roger Rabbit? Don’t count on it!

Steer Clear
You can spin your vehicle a full 360 degrees as you try to drive along the crazy course and regain control of your cab.

Based on the Hit Film
Roger Rabbit’s Car Toon Spin was inspired by the Academy Award®-winning film, Who Framed Roger Rabbit. Directed by Robert Zemeckis and produced by Steven Spielberg, the film successfully created the illusion that animated characters were interacting in the “real” world with people, thanks to the state-of-the-art technology of that time.

And soon, Guests of all ages will get to experience an all-new attraction in ToonTown: Mickey & Minnie’s Runaway Railway.

Mickey & Minnie’s Runaway Railway is opening at Mickey’s Toontown in Disneyland Park in 2023, though an exact opening date has not yet been announced. The attraction will be the very first ride at Disneyland that is actually themed after Mickey Mouse himself, so Guests are in for a real treat.

Mickey & Minnie’s Runaway Railway opened in 2020 at at Disney’s Hollywood Studios at Walt Disney World Resort in Florida, so Guests who have visited Disney World have already experienced the attraction there. Aside from the exterior of the attraction and the queue, the ride in California will be identical to the Florida version.

Below, you can read more about it, per Disney’s description:

Character meet and greets offered in Mickey’s Toontown in Disneyland

This is one of the best places to meet characters in all of Disneyland Park!

Throughout the year, you can spot Mickey Mouse, Minnie Mouse, Donald Duck, Daisy Duck, Goofy, Pluto, and Chip ‘n Dale. We have even spotted other characters like Marie from The Aristocats here, too! And in the past, other characters like Roger Rabbit, Clarabelle, and Horace have also showed up to greet Guests.

We always recommend checking the official Disneyland app during your visit to find out where you can spot characters in the Parks. You can also ask a nearby Cast Member for more information.

While Mickey’s Toontown is not the most popular place to grab food at The Happiest Place on Earth, the land is located all the way in the back of the theme park, so the fact that you can pick up snacks here is definitely a perk.

Below is a list of the dining offerings in Mickey’s Toontown. As always, check the official Disneyland app for more information on what is available during your visit.

All of the dining offerings in Toontown are quick-service restaurants, and you only have to walk right up to the window in order to pick up your food, so no reservations are needed.

Mickey’s Toontown offers so much fun for the whole family. If you want to book a trip to visit this land at The Happiest Place on Earth, Disneyland Resort in California, CLICK HERE!

Comments Off on Explore Mickey’s Toontown at Disneyland