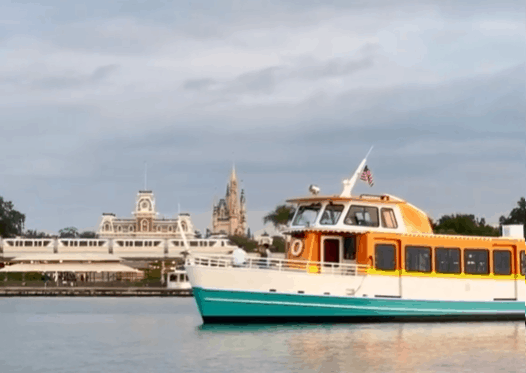 All aboard! If you’re a fan of the watercraft transportation at Walt Disney World Resort or you have an upcoming trip to The Most Magical Place on Earth, we have some exciting news for you. An all-new watercraft has joined Disney World’s motor cruiser fleet.

Disney Parks took to social media to share a new video of the new watercraft, the Tradewinds. Take a look below:

In the video, Disney shares that this is the first time a new watercraft has joined the Walt Disney World fleet since the 1990s. Here’s what Disney says:

The other day, transportation Cast christened a brand-new watercraft, the Tradewinds! Mickey and the Walt Disney World Ambassadors even made a guest appearance, then Cast were invited out for a sea trial. This was the first watercraft to join the motor cruiser fleet since the ’90s, and we cannot wait for Guests to come aboard.

Disney Parks Blog also shared more information on the motor cruiser, including an explanation of the watercraft’s name:

The cruiser is called Tradewinds, a name that was chosen by Walt Disney Imagineering and voted on by watercraft cast members. “Trade Winds” refers to the nearly constant wind that blows across the equator. And it’s the perfect name for this new vessel, since watercraft cast members have constantly delivered remarkable guest service across Bay Lake and the Seven Seas Lagoon since the fleet was launched.

But the name isn’t the only thing that cast members helped to choose. Watercraft cast members offered feedback that directly impacted the design of the vessel, from the position of the pilot house to the amount of cabin space available to guests.

“We solicited feedback from cast members about the things they would like to see in a new motor cruiser, and we put it into the boat,” said Transportation Guest Experience Manager Collin Garton. “Everything about it was made to make cast member input a reality.”

The small adjustments that make Tradewinds stand out among the other three motor cruisers in the fleet make a big difference to both the cast and the guest experience.

“It’s a great addition to the fleet,” said Billy Carter, a Transportation Engineering Services cast member who made sure everything on the boat was primed and ready to go before its launch. “Everybody is really proud of it. I think it’s going to go over big time with the guests.”

Watercraft are some of the many complimentary transportation options for Disney World Guests. When you visit The Most Magical Place on Earth, you can utilize Monorails, buses, the Disney Skyliner, and, of course, water transportation to get all around the Resort, to and from the theme parks, the Disney Resort hotels, Disney Springs, and more, depending on your destination.

Related: Which Disney World Mode of Transportation Is the Fastest?

Below, you can read more about water transportation at Disney World, per the official website:

Turn your travel into a treat on our fleet of boats that’s an attraction in itself.

Take in the scenery and relax with welcome breezes as you sail around Seven Seas Lagoon and Bay Lake. Feel the wind in your hair and the magic in the air as you cruise Crescent Lake and Lake Hollywood. Water taxis and ferries sail to and from Magic Kingdom park. Most routes run on 15- to 30-minute intervals.

Disney Springs
Not operating at this time

Hours of operation vary subject to water and weather conditions. Please note that no luggage or alcohol of any type is permitted on Disney watercraft. All strollers must be folded and stowed out of the aisle. Medical strollers for disabled Guests will be treated as wheelchairs.

What is your favorite mode of transportation at Walt Disney World? Let us know in the comments!

We can help you book the perfect Disney trip — click here for more information!