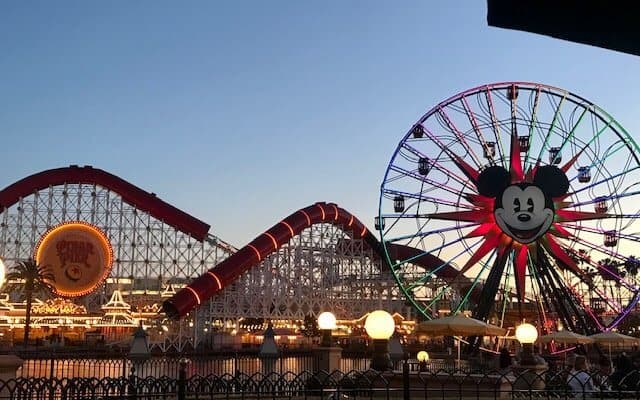 Disney Genie+ has launched this week in Walt Disney World and with it the option of purchasing Individual Lightning Lane attractions. The new digital service has left Guests divided, and now Disney fans are getting ready for the Disney Genie launch over at the Disneyland Resort.

One of these future Lightning Lane attractions, however, has proven to be disappointing to Disney’s California Adventure Guests and has riders shocked at its state of disrepair.

Radiator Springs Racers opened back on June 15, 2012, along with the unique Cars Land area. The ride opened to rave reviews from Disneyland Guests, and has remained extremely popular since its launch, with Guests often waiting upwards of two hours to race their fellow Disney fans.

Once Lightning Lane and Disney Genie+ launch in Disneyland Resort in California, it has been revealed that Radiator Springs Racers will be one of the costly Individual Lightning Lane attractions.

Lightning McQueen’s racers are seemingly a fitting attraction for the “Lightning Lane” service.

The new digital planning service Disney Genie started on October 19, alongside the paid-for service Disney Genie+, which allows Guests to purchase Lightning Lane access to a number of rides at the Resort throughout the day. Lightning Lane is the new FastPass queue that will get Guests on to a ride faster by allowing them to skip the Standby queue.

Rise of the Resistance in Star Wars: Galaxy’s Edge has proven to be a popular purchase and has sold out almost every day since Disney Genie+ launched in the Orlando theme park.

It seems that Guests are now worried about paying to experience Radiator Springs Racers, as some of the animatronics and effects look to be suffering some wear and tear.

RyanTheme Park posted a video to Twitter to confirm the current state of the Cars Land attraction:

It’s time to talk about the state of neglect that Radiator Springs Racers is in. Soon this ride will be a premium lightning Lane attraction it’s absolutely pathetic how bad of show that the ride is currently in. I would be mad if I paid for this.

It's time to talk about the state of neglect that Radiator Springs Racers is in. Soon this ride will be a premium lightning Lane attraction it's absolutely pathetic how bad of show that the ride is currently in. I would be mad if I paid for this. pic.twitter.com/R1sEXXFgIM

The video shows multiple animatronic versions of fan-favorites Lightning McQueen, Mater and Sally all losing the ability to move their “mouths” to the attraction soundtrack, as well as some Cars (2006) characters not moving on their tracks.

The video sparked debate among Disney Guests about whether the ride’s issues should be addressed before becoming a paid-for Lightning Lane experience.

Marc responded to the video pondering:

It’s in horrible condition. I was on it last week and half the things in the show building didn’t work.

We’ll have to see what happens to Lightning McQueen and his friends over in Disney’s California Adventure. Stay posted to Inside the Magic for more updates on Disneyland’s launch of Disney Genie.

Tour Ornament Valley and arrive in Radiator Springs—the cutest little town in Carburetor County—where the movie Cars springs to life. As you prep for the big race, all the locals show up to help. Mater, Lightning McQueen, Doc Hudson, Sally, Luigi, Guido, Mack and Ramone are all rooting for you!

What do you think about the state of Radiator Springs Racers? Have you ridden the attraction lately? Let us know!