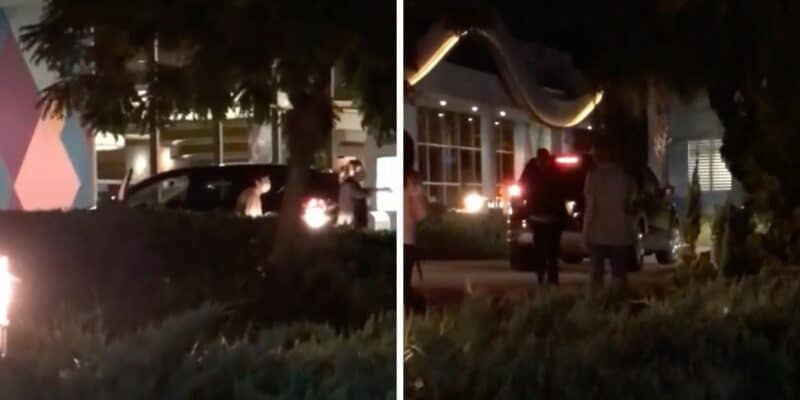 Both Images: Credit: Liana B.

Late last night, Monday, October 18, Disney World Guests were in for a surprise when they noticed a car parked on the wrong side of the Art of Animation hotel lobby, near the pool area of the Resort hotel.

Disney World Guest Liana Bassett was at Art of Animation when the incident occurred. She told Inside the Magic, “We were standing in line at the bar near the Nemo pool when a Cast Member who worked at the bar looked up and said to another Cast Member ‘uh, is there any reason why there’s a car driving up here?'”

Bassett continued to explain that once they turned around to see what the Cast Members were talking about, they noticed a black Ford Escape driving up the pathway between Landscape of Flavors and the Nemo pool from the direction of The Lion King wing. Bassett sent Inside the Magic the following video, where you can see where the car was located.

She continued to tell Inside the Magic that Cast Members acted quickly and surrounded the car and asked the driver to stop. The Guest then got out of the car and talked to the Cast Members for a minute, though Bassett could not make out exactly what they were saying.

Not long after, a Cast Member got into the Ford Escape and slowly backed out and drove the car back around to the front of the Art of Animation building as other Cast Members directed Guests to move out of the pathway as the car passed by, which you can see in the video below.

Bassett told Inside the Magic that she was told by another Cast Member that the Guest driving took a wrong turn in the dark and couldn’t find her way back to the front of the lobby.

Luckily, no one was injured.

Have you ever seen anything like this while on Disney World property? Let us know in the comments below.