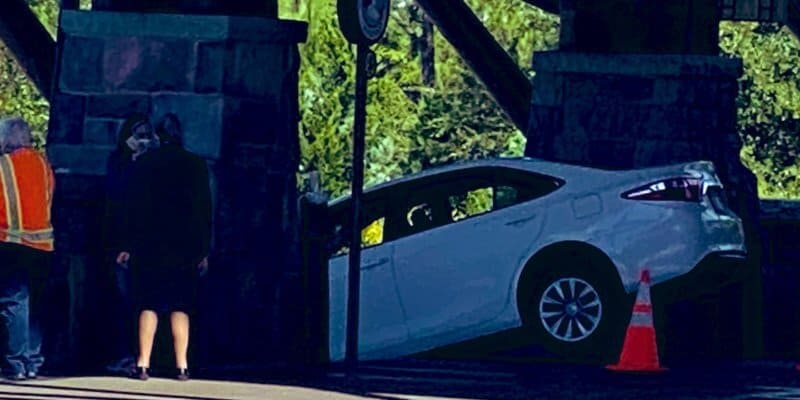 Earlier today,we reported the story of Guest accidentally driving their vehicle down the stairs outside Disney’s Wilderness Lodge. But now, it has been confirmed that the vehicle is no longer on the steps of the Disney Resort hotel and it has since been towed away.

The incident originally occurred this morning when a driver was presumably leaving Disney’s Wilderness Lodge (a Disney Resort hotel near Magic Kingdom). According to photo evidence, it looks as though the driver thought they could turn left to leave the hotel’s driveway, but instead accidentally started driving down the steps.

Finished breakfast and it’s still there this is why we can’t have nice things! pic.twitter.com/RfToTpIqol

In an article by local news station Fox 35, it has been confirmed that the vehicle has been towed away since the incident occurred:

A video of the incident was even posted onto the Walt Disney World passholder page on Facebook, where thousands of shocked comments flooded in.

She told FOX 35 in a private message that “I am staying at the Grand Floridian. I was over at Wilderness Lodge for breakfast and came upon this scene.”

She also confirmed that a tow truck had to come to move the vehicle.

As you can see in the video below, Disney security officers quickly arrived on the scene to prevent any Guests from coming near the vehicle as they waited for a tow truck to arrive.

No injuries have been reported at the time of this article’s publication. For more information, you can read our initial report here.

Keep in mind that Disney Cast Members are there to assist you while you are on vacation, and Guests are encouraged to always ask for assistance when they need it. Although this is not a common mishap to occur on Disney property, we always like to remind our readers that mistakes and issues can arise at Walt Disney World Resort. We are glad that the situation was handled, and we hope it did not dampen this Guest’s vacation.