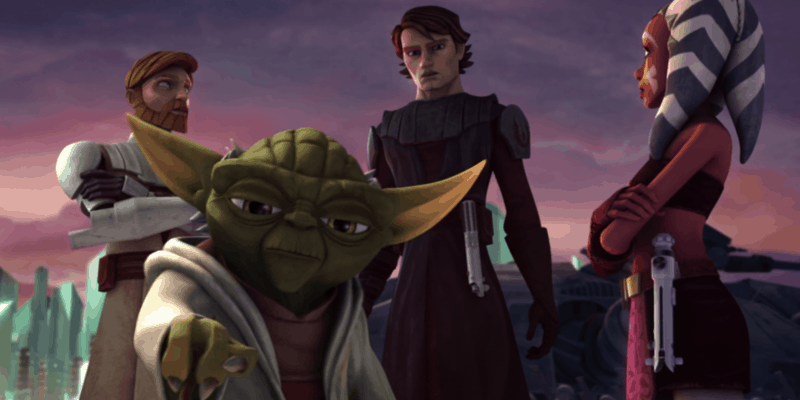 Last year, the prolific voice actor, Tom Kane, suffered a stroke. Kane was known for his roles across a wide range of media including 1997’s Spider-Man animated series, The Powerpuff Girls, Archer, and a huge assortment of Star Wars entertainment including appearances in Star Wars: The Clone Wars, Star Wars: Episode VIII — The Last Jedi (2017), and most recently, Star Wars: The Bad Batch.

Kane, a voice actor of critical acclaim, has been featured in a huge assortment of projects dating back to the 1990s. Arguably, most well-known for his work with Lucasfilm and Star Wars, Kane also voiced other non-animated projects like providing the voice of the show’s narrator for Walt Disney World’s Happily Ever After nighttime fireworks spectacular.

For Star Wars, Kane has voiced, most notably, Jedi Master Yoda and Admiral Yularen, as well as the narrator, in Star Wars: The Clone Wars (2008) and its subsequent popular animated series. The voice actor went on to voice the character of Yoda — whom Frank Oz made famous in the Star Wars original trilogy — in other projects like LEGO Star Wars: The Yoda Chronicles, LEGO Star Wars: Droid Tales, and Star Wars Forces of Destiny.

With many movies, television, and video game credits under his belt, Kane continued to voice fan-favorite characters up until a stroke at the end of last year caused him to break from voiceover work. Part of that original statement from Kane’s family reads:

[Kane] had a left side stroke that gave him right sided weakness and damage to the speech center of his brain. This means right now he cannot efficiently communicate verbally, nor read or spell.

And now his daughter has announced Kane will retire from his work. His daughter, Sam, took to Facebook to post the lengthy statement regarding her father:

Because of this stroke my dad has been forced into early retirement. The damage to his speech center is just too severe. He cannot read well nor get out the words he wants, which is sort of required for voice acting. He has what’s called Apraxia which means he has difficulty moving smoothly from one sound, syllable or word to another. Groping movements like with his jaw, lips or tongue to make the correct movement for speech sounds are impaired.

The statement goes on to say:

Essentially he knows exactly what he wants to say, he knows exactly what’s going on, but the words are trapped in his head, and when they do come out, it’s usually too slurred to understand. He has a handful of words he says perfectly, but just a handful. He relies on all forms of non verbal communication now. Thank god he’s an actor and great at charades.

Kane’s daughter goes on to say how sad it is that “in a split second one of the most talented voice actors ever lost his voice and career.” You can read the full statement here.

Kane’s last television credit was as the narrator for Dave Filoni’s The Bad Batch which saw Kane narrate the opening segment from its first episode on Star Wars Day (May 4) titled, “Aftermath”. The episode, of course, provided the transition from The Clone Wars era to this new frontier in Star Wars storytelling.

What has been your favorite Tom Kane performance? Let us know in the comments!