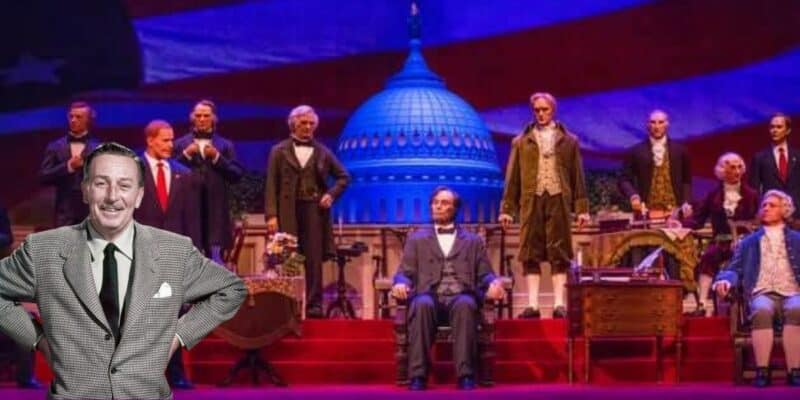 Disney World has many attractions that are both enjoyable and educational. At Magic Kingdom, Guests can kick back, enjoy the air conditioning while giving their feet a break while learning about the various Presidents. The latter have been in office representing the United States of America.

The Hall of Presidents is a show where Guests are able to see full animatronics come to life representing every President in American history. From George Washington to Abraham Lincoln to current President Joe Biden, each President speaks in the show, keeping their memory alive to all who see it. Recently, Disney Parks (@disneyparks) have taken to TikTok to share a secret about the attraction.

Walt created Great Moments with Mr. Lincoln for Disneyland and then had the idea to expand that idea at Walt Disney World Resort with The Hall of Presidents. The show was Walt’s idea, which is exciting as it is an attraction he thought up that Guests can only enjoy at Magic Kingdom. However, Walt passed away before his vision came to life.

When Walt passed, Roy Disney, Walt’s brother, took charge to keep the Disney legacy alive and growing, and he remembered how much Walt loved the idea of having The Hall of Presidents at Magic Kingdom. Because of this, Roy decided that he was going to make sure that his idea would come to life.

The TikTok promotes the Disney+ series Behind the Attraction, which has an episode dedicated to the ride.

Disney World describes The Hall of Presidents as:

Know Before You Go
The show is approximately 25 minutes long and runs continuously throughout the day. Be sure to check the large clock hanging under the marquee for the next available showtime.

What do you think about this hidden fact about The Hall of Presidents?