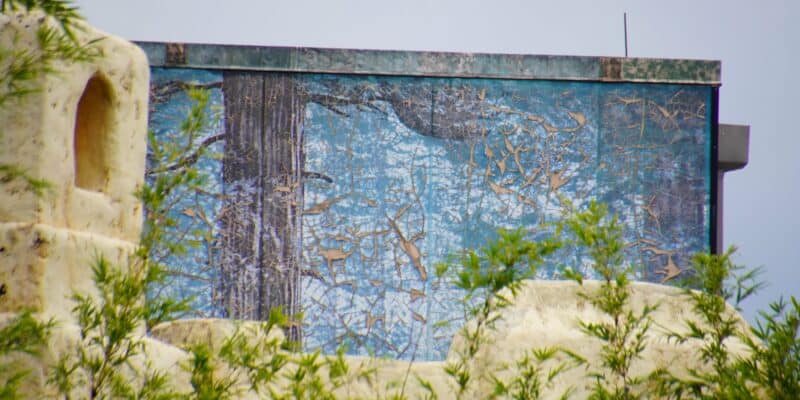 Star Tours – The Adventures Continue is a fan-favorite ride at Disney’s Hollywood Studios that takes Guests on a thrilling 3D space flight to iconic destinations from the Star Wars franchise.

The attraction officially opened at Disney’s Hollywood Studios on May 20, 2011, and now, 10 years later, Guests are beginning to notice some deterioration on the iconic mural on the Star Tours show building.

Bioreconstruct took to Twitter to share some new photos of the Star Tours show building at Disney’s Hollywood Studios, which showcases an iconic mural. It seems the hot Florida sun has finally caught up to the mural as deteriorating and weathering is clearly visible:

As we have seen in the past, this is not the first Disney element to show weathering or fading over the years. This is more than likely due to being out in the hot Florida sun day in and day out. We have seen other areas of Walt Disney World experience weathering as well, including the Tangled area in Magic Kingdom and Spaceship Earth in EPCOT.

Featuring a flight simulator, digital 3D video, Audio-Animatronics characters and “in-cockpit” special effects and music, this attraction immerses you in the Star Wars mythology for an unforgettable intergalactic adventure.

Have you noticed the weathering on the iconic Star Tours mural? Let us know in the comments below.