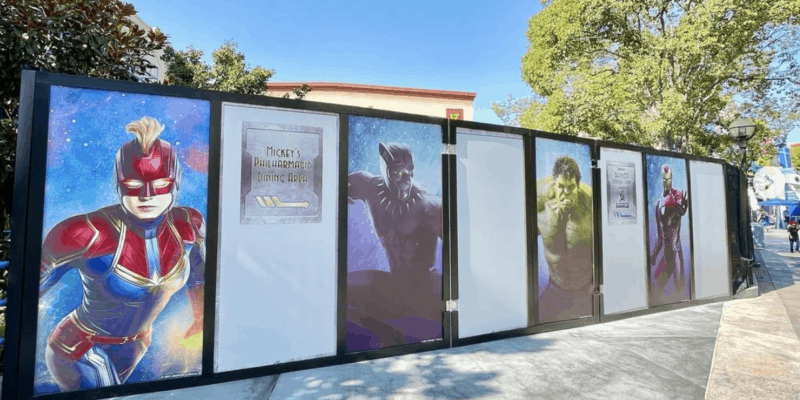 Walt Disney once said “Disneyland will never be completed. It will continue to grow as long as there is imagination left in the world.”

The Walt Disney Company has held true to that fundamental belief, and they are always working to either bring something new to the theme parks or improve what is already there. Sometimes they are very open with what Guests can expect when they see construction, and other times they keep things more under wraps.

Guests visiting Disney California Adventure Park at Disneyland Resort noticed that some walls had been put up in the Hollywood Land area of the theme park. That area of the park is home to the attractions like Monsters, Inc. Mike & Sulley to the Rescue! and Mickey’s PhilharMagic. There are also several places to eat and merchandise locations in the area.

Instagram user Wonders of Magic (@wonders_of_magic) shared photos of the walls that are up in the area of Hollywood Land closest to the Monsters, Inc. ride.

In true Disney fashion, these are not just plain construction walls. Disney knows that selfies are king around the Park right now, so they themed the walls so Guests could take great selfies with some of their favorite Marvel characters.

Disney has not said what kind of work is going on behind the walls, however, it does not seem to be impacting any rides, attractions, or store operating hours. The exit to Mickey’s PhilharMagic is behind the wall, and the entrance to the Disneyland Resort Backlot Premiere Shop — where Guests can find a ton of great marvel merchandise — is located near where the wall is.

Both PhilharMagic and the Backlot Shop are still listed as open and operating on their normal schedules according to the Disneyland app.

It is possible that Disney is just making some small improvements, like painting or improving the walkway. They could be working on some sort of new display. Disney has kept mum on the subject, so we will just have to see what has happened when the walls are removed. Until then, Guests can head over to the constructions walls to take some fun selfies!

Have you seen the construction walls up in Hollywood Land? What do you think is happening? Let us know in the comments!