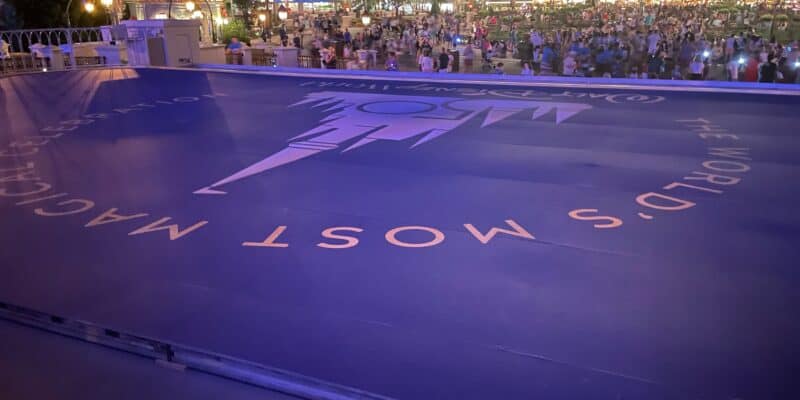 As the 50th anniversary rolls in, the Disney Parks are changing to join in on the Most Magical Celebration on Earth.

We are now seeing transformations fill every Disney Park, giving Guests an extra touch of magic when they visit over the next 18 months, starting October 1. EPCOT’s Spaceship Earth will soon debut its new Beacons of Light as well as Harmonious, Disney’s Hollywood Studios is going to add lots of shimmer to Tower of Terror, and Disney’s Animal Kingdom will project on Tree of Life, as well as debut Disney KiteTails, an all-new show!

Magic Kingdom showcases the most extensive transformation as the castle is now shimmering with golden accents, highlighted blue tones, and stunning pink sparkles. We are also seeing attractions in Fantasyland receive some cosmetic updates! Princess Fairytale Hall now has a gold-plated sign with a gold look extending to Prince Charming Regal Carrousel. “it’s a small world” has a new splash of color in the interior facade, as well as Mad Tea Party getting a paint refresh. Main Street, U.S.A. has loads of golden accents, with 50th banners decked out in the castle jewels lining the street. On top of that, Disney Enchantment, a brand-new evening show, will also debut!

Over the past several months, we have seen the Cinderella Castle stage being redone, and now, the final touches have been made. We saw the stage completed yesterday with a 50th anniversary design placed on top!

Although Guests may not see the full design from the floor of the castle, while walking through, the new look is highly visible and is definitely an eye-catching piece as Guests walk through the castle.

Since the pandemic began, we have not seen any shows return to the Cinderella Castle stage. Most recently, we did hear that beginning on October 1, 2021, the “Let the Magic Begin” show will now return with a 7:55 a.m. showtime.

Start the Day in a Memorable Way

Just before Magic Kingdom park officially opens, make your way down Main Street, U.S.A. to the front of Cinderella Castle. Soon, the sound of trumpet fanfare bursts through the morning air, signaling the arrival of the Royal Herald.

There, you’re greeted by Mickey Mouse himself—along with a special Disney surprise you’ll have to experience to believe!

Let the Magic Begin is available to any Guest with a ticket to Magic Kingdom park on that date.
Guests who wish to experience the show may enter the park one hour prior to park opening.

Multiple shops on Main Street, U.S.A. may be open at this time, including Main Street Bakery.

Since the show takes place on the Cinderella Castle stage, it is fitting that Disney ensured that the stage was ready to go with a new 50th anniversary look. At the moment, there has not been any announcement of a daytime stage show returning to Cinderella Castle. Before the pandemic, Mickey’s Royal Friendship Faire would take place multiple times a day but has been haunted since the Park’s closure.

With a brand-new stage and a massive celebration on the way, it will be interesting to see if a new show or the previous one returns to entertain Guests during the day. We are slowly starting to see entertainment return, and since the celebration will last 18 months, there is plenty of time to implement a daily castle show.

Do you think that Magic Kingdom needs to see a daily castle show return? Let us know your thoughts in the comments below!

Comments Off on New Stage Unveiled at Magic Kingdom, Could Daytime Shows Return?